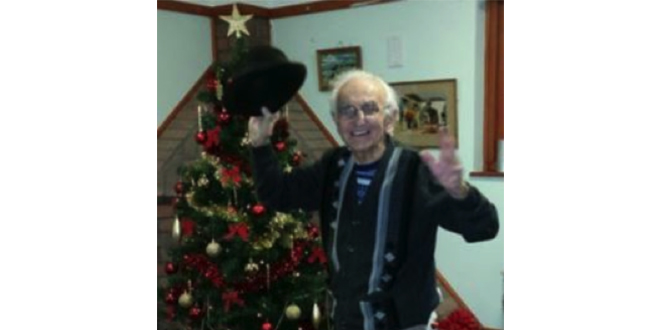 He’s one of 40 residents regularly taking part in exercise sessions led by the specially trained team at the home, and has proven that you’re never too old to start exercising again. He won the national award for embracing his new hobby with such enthusiasm, dancing his way to victory.

Jacqueline Dye, activities co-ordinator at Appleby House, nominated Ken for the award. She said: “Ken is always waiting at the door for our Oomph! sessions to start. He loves exercise and used to do ballroom dancing with his wife who unfortunately can no longer dance.

“He’s so enthusiastic during the sessions and gets up to join me for a waltz. When Ken first arrived at Appleby House he used to sit in his suite and was unwilling to come out, now he is dancing his days away and is so much happier and always smiling.”

Ken said: “It takes me back to the old days. It rejuvenates me both of mind and spirit of my days as a youngster in the forces and civilian life with my dear wife of 66 years.”

Joan, Ken’s wife, said “Ken really enjoys the Oomph! sessions. He seems happier and more aware. It makes my heart glad that Ken is happy in his surroundings.”

Ken is one of thousands of older adults taking part in Oomph! sessions each month across the UK. His prize for winning the competition is his very own ballroom dancing experience and an ‘Oomph! Party’ at the home, including a bespoke cinema experience of some classic dance hall moments.

Shona Bradbury, home manager at Appleby House, said “The visual aspects of Oomph! works really well in getting residents engaged. We’ve residents, colleagues and relatives all joining in Oomph! sessions – they really lift the mood of the home. Jacqueline is revelling in her role as an Oomph! Instructor and she consistently delivers enthusiastic, confident and engaging sessions. She’s adored by residents.”

George McNamara, head of policy at Alzheimer’s Society, which funded the training and support programme on behalf of Appleby House, said: “We’re thrilled to be a part of this wonderful story. Leading a physically active lifestyle can have a significant impact on the wellbeing of older people, especially those living with dementia and mild cognitive impairment.

“Exercise is beneficial for physical and mental health and may improve the quality of life for people in all stages of the condition. Oomph! gets people exercising in an enjoyable way. By involving family and friends in the sessions makes it even more powerful.”

Oomph! founder Ben Allen said: “Oomph! stands for Our Organisation Makes People Happy! and that’s what we aim to do every day. Our research shows that older adults don’t proactively seek out exercise classes. Instead, we offer them a song and dance party that happens to exercise their body. They’re enjoying themselves, they’re socialising and they’re getting fitter and stronger at the same time.”