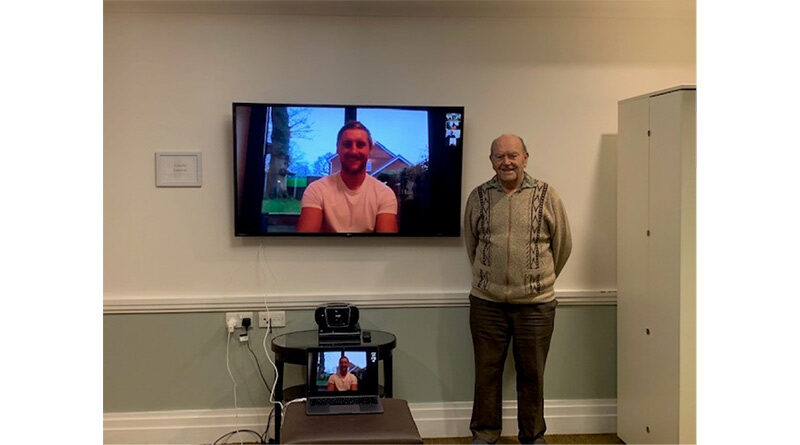 Stan Riley, a 92-year-old resident at Sunrise of Hale Barns care home, has had a video call with Altrincham Football Club players and the club’s Chair.

A lifelong fan of the club, Stan has supported Altrincham since 1944 and had never missed a game by regularly taking the supporters’ coach across the country for their matches. Stan would also attend the club’s games with his late wife before she passed away.

Yet, since the COVID-19 pandemic, Stan has been unable to attend Altrincham’s matches due to the social distancing measures enforced on the sport.

Determined to reconnect him with the club, Sunrise of Hale Barns’ Activities Coordinator, Regina Faria, arranged for Jake Moult, the team’s captain, Shaun Densmore, the club’s longest serving player, and Lawrence Looney, one of the Chairs, to speak to Stan and his fellow residents at the care home.

Stan then had a wide-ranging conversation with the club where he discussed the long-term plans for Altrincham with Lawrence as well as their mutual love and loyalty to the team with Jake and Shaun. Having never spoken to a player, Stan was delighted by the opportunity and thoroughly enjoyed the special conversation.

With almost seven decades worth of memories watching Altrincham play, Stan says that his favourite game occurred in 1978 when the club went to Wembley and won the FA Trophy after beating Leatherhead 3-1. Stan remembers how this was the first time that all of his family watched a football game together. His second favourite match was Altrincham’s 2-1 win over Birmingham City in the 1986 FA Cup, the last non-league team to win away in that competition.

Speaking of Stan’s conversation with the club, Sharon Parkes, the Director of Community Relations at Sunrise of Hale Barns, said:

“Like many others, Stan is a dedicated supporter of Altrincham Football club and has been disappointed to not see the team play during the COVID-19 pandemic. However, we wanted to give Stan an experience to remember and we were thrilled to arrange a video call between some of the fantastic players at the club and one of the Chairs. Once it is safe to do so, we look forward to helping Stan watch Altrincham play in-person once more.”