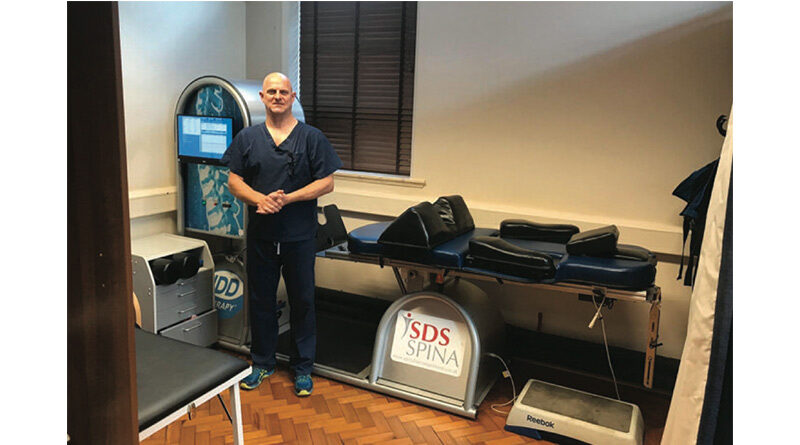 By Richard Hughes, MCSP, Clinical Director of Physio at the Lodge Ltd in Nantwich, Cheshire.

Sciatica becomes more common as we age. This does not mean, however, that older people should accept it as a part of life! So, what can they do to tackle unresolved sciatica?

Most bouts of back pain are short lived and a lot of issues are referred to as ‘non-specific low back pain’, meaning it is difficult to ascribe the symptoms to a specific structure. The body typically deals well with these issues and recovery is just a matter of time. Over the course of a week or two the pain typically subsides, movement becomes easier, and we reach a point where we ask ourselves “what back pain?!”

However, when back pain persists, is reluctant to settle and then the symptoms are felt in the legs as sciatica, it may be the case that disc- based pathology is at fault. This is where IDD (‘Intervertebral Differential Dynamics’) Therapy non-surgical spinal decompression can help people without them having to be dependent on pain medication just to get through the day.

Back pain is complex issue with many causes. Whilst there can be severe causes of back pain, such as a bone fracture, many problems arise due to chronic exposure to certain loads and/or positions, such as sitting for long periods of time. Sometimes people can trace their back pain to a traumatic event, or the pain can come on as the end point of a gradual deterioration of strength and flexibility.

In a situation where structures have been weakened over time, a simple movement can be the triggering mechanism – the veritable straw that broke the camel’s back. However, an awkward or unexpected movement can be the trigger and result in a slipped disc. It is also worth noting that the terminology of a slipped disc, a herniated disc or a disc prolapse all relate to the same issue and are not three separate conditions.

The intervertebral disc is a curious structure; it is a pressurised spacer that sits between the bony vertebrae in your spine. In the centre of the disc is a pressurised sphere with a consistency not dissimilar to toothpaste. The job of the discs is to keep the vertebrae away from each other, ensuring that the nerves that branch off from the spinal cord have sufficient space to move freely and not become compressed or ‘trapped’. There is no blood in the discs, they rely on the exchange of fluid and nutrients that flow from the adjacent vertebrae. Movement and loading are therefore hugely important in maintaining the health of these amazing structures. The disc is a tremendously strong structure, but as with most things it is open to abuse and deterioration.

The soft tissues including the muscles and ligaments which are packed around our spines all play a vital role. The difficulty is that the spine sometimes needs to be a flexible structure that allows us to move, whereas at other times, such as carrying a load, it needs to be a rigid beam and maintain its form.

When these abilities are used inappropriately, or when movement becomes restricted, or activity levels decrease, these structures are less able to replenish nutrients to keep themselves healthy. This weakens them over time, it becomes easier to injure them and their ability to recover is also impaired.

‘Sciatica’ is a condition where symptoms are felt in the distribution of the sciatic nerve. There are a number of nerve roots that exit the low back and come together to form the sciatic nerve, which is about as thick as your index finger and travels through your buttock and down the back of your leg.

If the discs become weakened or if too much force is exerted on them from certain twisting or awkward bending for example, the wall of the discs can bulge. A disc bulge, or disc herniation, where the walls of the disc are pushed outwards can put pressure on these nerves exiting the spinal cord.

Pressure on, or inflammatory irritation of, the sciatic nerve from a bulging or herniated disc can cause intense pain travelling down the buttocks and legs. It can be a constant dull ache or feel like jolts of electricity. When people suffer with sciatica, it can follow them around as an unwelcome companion.

HOW TO RELIEVE SCIATICA

It is well documented that many people have disc-based issues including disc herniations apparent on their MRI scan, yet they remain symptom free. The body is very adept at managing these processes. Think of them as running repairs; after all the spine is a living structure. Inflammation has to be present to a degree at certain points because that is how the body fixes these issues.

When pain strikes, the body will do the only thing it can, namely, strongly contract muscles in that region to lock it down. This spasm is completely normal and prevents further movement. The reason for this spasm is simple and primitive; when in pain the spasm will afford us some ability to hobble off to a safe place to lick our wounds and start the recovery process.

Physical therapy which combines hands-on treatment with stretches and strengthening exercises for the back, core muscles and the body as a whole, serves to improve the function of the spine and facilitate the body to heal. Gradually the pain will subside.

The challenge arises when despite best efforts, the pain persists. When treatment is not working it can be frustrating. At this stage IDD Therapy non-surgical spinal decompression is used within the treatment programme.

IDD Therapy is delivered using an advanced machine called the ACCU SPINA which delivers a specific pulling force to the relevant area of the spine. Patients lie comfortably on a treatment couch and are connected to it with ergonomic harnesses around the hips and upper body.

IDD Therapy was developed to address the shortcomings of traditional traction. Using physics and computer technology, IDD Therapy gives therapists a tool to take pressure off targeted spinal segments and at the same time gently mobilise soft tissues to make them more flexible and thus encourage the body’s natural healing mechanisms to operate.

As the patient lies on the ACCU SPINA table, the harnesses are connected, and the parameters of the treatment are put into the computer, and the treatment can commence.

The ACCU SPINA applies a specific gentle pull via a belt attached to the pelvic harness. The angle at which the force is applied will deter- mine where the pull will be focussed. This makes it possible to direct the pull to the segments which are most problematic.

The pulling force is brought on slowly and this opens the space between two vertebrae, thus taking pressure off the disc. As the space is opened, the ACCU SPINA then gently oscillates the force, that is, whilst maintaining a degree of tension, the force is brought on and off partially and this serves to work the tissues, whilst exposing the disc to a pumping type of motion that stimulates the passage of nutrients.

Patients remain on the ACCU SPINA for twenty five minutes during which time a series of cycles of pulling force are applied to decompress the disc and importantly, work the tissues around the joint.

A key benefit of IDD Therapy is that the amount of force which is applied is far greater than can be applied with hands-on treatment, especially for the amount of time needed to bring about the change in the tissues.

The forces used in IDD Therapy are built up to and over half a patient’s body weight. Whilst the treatment forces are in pounds, if we consider someone who weighs 70kg or 11 stone, half of that weight is 35kg. This is a considerable weight to lift comfortably, let alone to be able to apply such force at a specific area of the spine.

Patients have a programme of up to 20 sessions over a six-to-eight week period. This is different from a traditional model of physical therapy where patients are given four-to-six treatments.

However, when pain persists and a condition has built up over time, it takes time for tissues to adapt, become more conditioned and improve function for long term pain relief. The programme of care is necessary to bring about lasting change to relieve pain.

At the same time as a patient has treatment on the ACCU SPINA, therapists use manual therapy to work on specific areas and, of course, exercises are given to strengthen the supporting muscles so that normal activities can be resumed.

4. RELIEVE PRESSURE ON THE SCIATIC NERVE

During IDD Therapy, pressure is taken off the disc. With some patients, the reduced pressure can allow the body to retract the disc bulge and, in some cases, the pain from pressure on the nerve can disappear quite quickly.

Typically, however it does take more time as the body adapts to the treatment and function is improved. As mobility increases and the spinal structures are better able to move, the body’s natural healing mechanisms can operate more efficiently. Patients can sleep better and this in turn helps healing.

It should be noted that there are times when a disc bulge may not appear to have changed over time and yet the pain is no longer present. We do not understand all of the body’s mechanisms and there are many factors which combine to cause pain.

By addressing the whole area with IDD Therapy, hands on treatment and exercise, therapists have far greater ability to resolve persistent sciatica from a disc bulge.

Many elderly people in pain are caught in a vicious cycle. The level of stiffness and pain make it very difficult to move and can lead to an avoidance mentality, where people are afraid of the consequences of moving. As we have seen, the body needs movement and the longer pain persists, the harder it can become to move and of course, our motivation to move decreases.

By breaking this cycle, older people can learn to have confidence in their ability to move and then go on and commit to some physical exercise to further both their physical and psychological recovery towards a pain free life again.

Of course, for some patients a condition may not fully resolve but achieving a level of pain reduction and improved mobility can still be life changing. As therapists the non-invasive treatment route is always preferable where possible, allowing for the reality that some conditions need to be addressed through the skills of a surgeon.