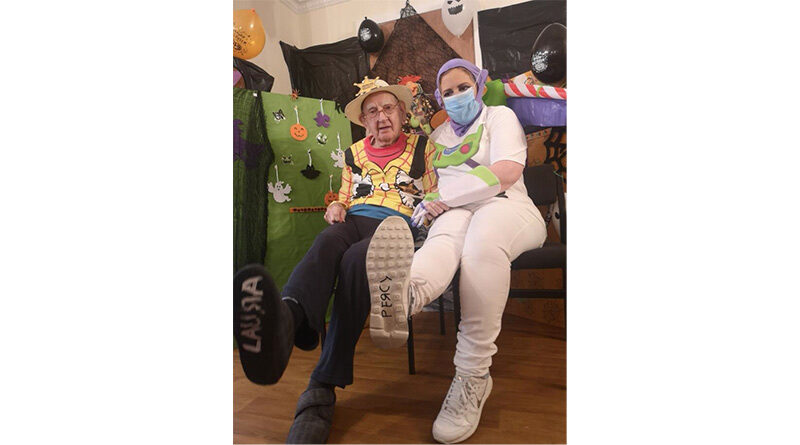 103-year-old Percy and best friend and care nurse, Laura Hagan, have stuck to their annual tradition of dressing up as famous twosomes for Halloween.

The pair who have become very close during Percy’s time at Renaissance Care’s Whitecraigs care home in Thornliebank, made this the third year in a row they took on the home’s costume competition together.

Last year Percy dressed up as Harry Potter, complete with the thunder-bolt scar and famous round glasses, while Laura complemented the costume with her own Hermione Granger get-up. The year before, they decided to go as Mary Poppins and her closest confidant, Bert the chimney-sweep. No detail was overlooked as Percy’s face was smudged in ‘soot’ while Laura had every prop right down to Mary’s magic parrot umbrella.

Every year Percy and Laura put their heads together to come up with a new idea for Halloween costumes which they can do together, managing to keep the final decision a secret from fellow residents and staff members until the big reveal at the annual Halloween party.

This year, they proved they ‘have a friend’ in each other by continuing the tradition, this time as famous best buddies, Woody and Buzz-Lightyear from Toy Story. Ex-policeman, Percy finds the prospect of being a sheriff quite fitting, seeing as he was once an “officer of the law”, and the pair were both excited to be able to taken-part in the Halloween celebrations after such a hard year.

Laura said: “This year has been difficult for everyone in the home, so it’s great that we could still go ahead with our Halloween plans – it means so much to our residents and to the staff. It just wouldn’t have been the same without our usual party.

“Percy and I always think long and hard about who we can dress up as next, whilst trying our best to not let it slip to other people in the home. Percy is always enthusiastic about getting involved, which just shows you, age is just a number. Whether you’re three or 103, you’re never too old to have a bit of fun with your friends and loved ones!”

Percy, who went viral earlier in the year for his TikTok dances, was ‘Buzz-ing’ to have seen his family all dressed up in costumes during their visit yesterday.

He said: “This is my 103rd year of dressing up for Halloween. I always enjoy seeing my kids, grand-kids and great-grandchildren getting dressed up, plus it is a great excuse to get involved and have a laugh with one another.

“Laura always makes sure we look the part. She certainly doesn’t do half-measures.”