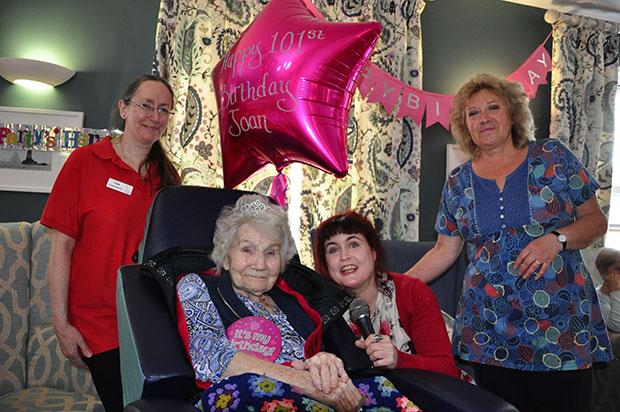 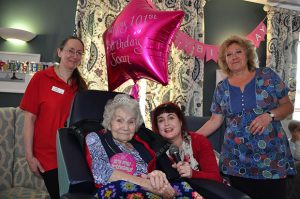 A ‘much loved’ lady born during the last few months of World War One has celebrated her 101st birthday with a tea party at her Dorset care home.

Friends and family, including Joan’s younger sister Peggy and god-daughter Sue, were among the guests at Colten Care’s Avon Reach home in Mudeford.

Reflecting on her long life, Essex-born Joan shared a message of kindness and respect that has stayed with her since childhood.

She said: “I had good parents who always taught me to do unto others as you would have them do unto you.”

Joan’s earliest memories are from the early 1920s. “I still remember my schoolroom with its blackboard and chalk, and I recall people being kind and helpful to me as a young girl getting on a train in London,” she said.

After leaving school Joan worked on the clerical side for the Prudential insurance company where she met her husband Reg. In the Second World War, she served in the Land Army and later did voluntary work for various good causes. Her lifelong hobbies include painting, sewing and pottery.

Asked for the secret of a long life, Joan said: “I’ve always had a happy time, including in childhood and at work. It’s important to enjoy life. Also, you should try and keep healthy and stay off the drink. You don’t have to be teetotal but you shouldn’t have too much.”

Joan has lived at Avon Reach since May 2016.

Lisa Sutcliffe, a Companionship Team Member at the home, said: “It’s a huge privilege to share in Joan’s birthday with her family and friends. She has a great sense of humour and is much loved by everyone here at Avon Reach.”