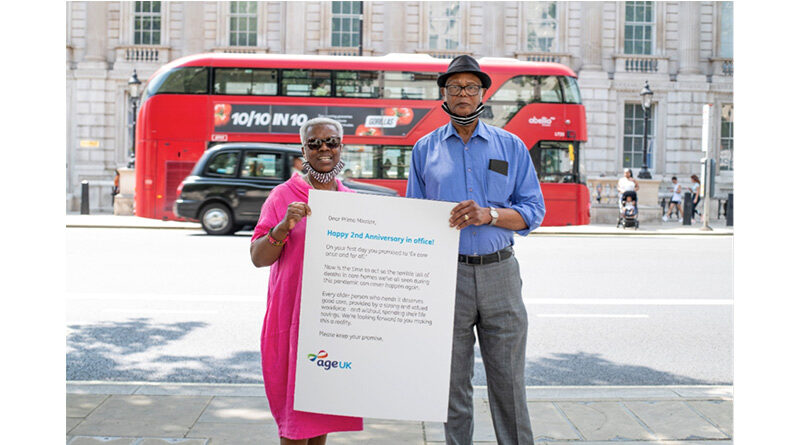 New analysis from the charity Age UK has found that in the two years since the Prime Minister made his promise to “fix social care once and for all”, over 1.4 million requests for social care from people aged 65+ have been turned down in England. This equates to nearly 14,000 older people a week not getting the vital care and support they believe they need.

In some of these cases an older person was found by their local council not to meet the tight eligibility criteria set for the social care system and that was the end of it (24% of all requests for help); while in others the older person was found ineligible but their council then referred them onto other services in the hope that they could assist them instead, including their local Age UK (26% of all requests for help).

The Charity marked the 2nd anniversary of the Prime Minister’s time in office by urging him in a letter to fulfil his first day promise to fix social care, and handing it in to 10 Downing Street today (Thursday 22 July). This follows a poll recently carried out by YouGov for the 76 charities, including Age UK, who campaign together as the Care and Support Alliance, which found that more than four in five (83%) of people want the Prime Minister to fulfil his pledge to “fix social care, once and for all”.

Meanwhile, all the indications are that in the midst of this pandemic, demand for care is high and rising. For example, data from the latest ADASS budget survey  shows that

Research recently published by Age UK has also found that being stuck at home for long periods, largely immobile and without the stimulation of company, is accelerating and intensifying some older people’s need for care.

This has been a week of important anniversaries for social care: not only has it been two years since the PM made his historic promise, it’s also ten years since the Commission on Funding of Care and Support (the ‘Dilnot Commission’) delivered its recommendations on the future funding of social care. Yet a whole decade later, social care in England remains chronically understaffed and underfunded, long term problems the pandemic has only made worse.

In the last ten years, there have been six ministers for social care and four Secretaries of State, all of whom have ultimately failed to reform and refinance provision. We have heard many public commitments from politicians but none have been fully followed through, letting down many millions of older people, disabled people of working age and unpaid family carers too.

“After all the recent media stories suggesting that the Government wanted to make an announcement about its social care proposals before recess it is very disappointing to have been let down once again. The fact that we all now thoroughly used to being led down the garden path doesn’t make this latest disappointment any easier, especially when we consider the damaging impact on older people and their loved ones.

“These constant Government delays carry a cost, and our new statistics show it is one paid above all by people who need care, vast numbers of whom are turned away when they approach their council for help. It’s easy to blame local authorities when this happens, but the responsibility lies squarely with central Government. Councils can only provide a person with care when they have the funding to do so, and when enough care staff can be sourced locally by care agencies to deliver it. Both are now in increasing short supply in many places, making it harder than ever for older people to get the support they badly need.”

“Two years after he made his historic promise it’s high time the Prime Minister followed through, and more than four in five of the English public agrees. I can certainly assure you that Age UK and other like-minded charities will be working hard to ensure the Government doesn’t forget the commitment it has made. Fulfilling it would make such a huge difference to today’s older people, and to all of us tomorrow too.”