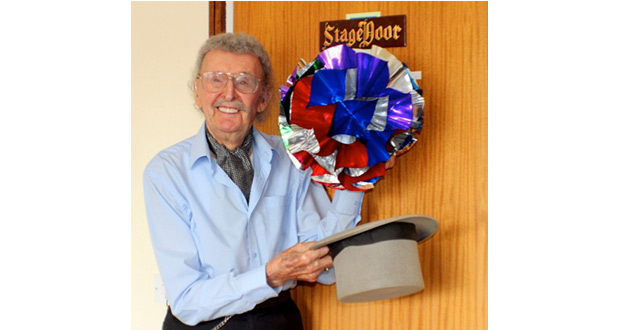 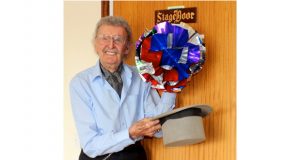 A world-famous magician and wartime entertainer is celebrating the start of his retirement at RMBI Care Co. Home Queen Elizabeth Court in Llandudno, after an astonishing 80 years in show business.

97 year old Mark Raffles, who is now a resident at the Home, is looking forward to a well-earned rest having entertained millions of people all over the world over four decades, including D-Day troops during the Second World War.

Mark became a regular on our TV screens during the 60s, 70s and 80s, appearing on popular variety shows with his famous pickpocket act under the stage name of Ray St Clair. He also guest starred on TV game shows such as 3-2-1 hosted by Ted Rogers.

Following D-Day in 1944, Mark was drafted into Europe, performing to British, American and Canadian troops. In May 1945, soon after Liberation Day, he performed for troops and civilians in the Channel Island of Guernsey.

Mark later received the Veterans Badge from the Ministry of Defence in recognition of his wartime service.

After the war, Mark returned to playing the Music Halls with his famous on-stage pickpocket act. He first appeared on our television screens in 1949.

Mark still corresponds with his many fans around the world and has inspired a new generation of magicians, such as Newcastle escapologist Chris Cross. He has also produced a number of books and DVDs.

Mark, who was known as the oldest working magician in the world before his retirement, said: “I’ve had a marvellous life and I am lucky to have been able to continue for as long as I have. Magic has led me to meet all sorts of interesting people and enabled me to serve my country.”

Speaking about his wartime service, Mark said: “Many were the times I was approached after an ENSA show by a serviceman saying he was a magician. Out would come his treasured pack of cards, ropes and thimbles. Magic was very much alive in the armed forces during the war.”

Gary Carr, Activities Coordinator at RMBI Home Queen Elizabeth Court, said: “It’s fair to say that Mark has brought more than a touch of magic to our Home. Our other residents and staff love hearing about his amazing career. His immense wartime contribution keeping up the spirits of our troops is humbling and it’s a privilege for us to care for him.”