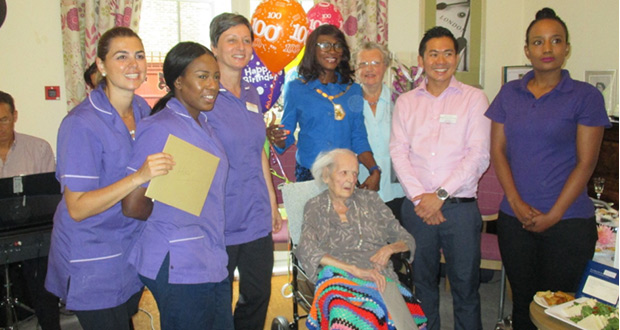 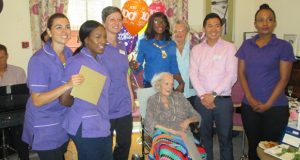 An award-winning care home in Wimbledon, Arthur House, has celebrated the 100th birthday of their longest and oldest resident, Hazel Honeyburne.

Family, friends and the staff at Arthur House threw Hazel, who turned 100 on Wednesday 2nd August, a party to commemorate her reaching her first three-figure birthday.

She was treated to a visit from Marsie Skeete, Mayor of Merton, who wanted to wish her happy birthday, a classical live singer, who performed all of Hazel’s favourite songs, and a special birthday cake.

Hazel was delighted to receive a congratulations telegram and birthday card from the Queen, along with multiple cards from residents and friends.

The birthday girl was born in Manchester, where she lived with her parents and three sisters. She loves classical musical and has always wished she could play the piano.

Hazel moved to Arthur House on 4th February 2012 and has enjoyed taking part in activities organised by the care staff, attending regular trips to the local park with other residents.

Arthur House is managed by Priory Adult Care, a new division within the renowned Priory Group, which was formed in April from bringing together two Priory adult care divisions, Craegmoor and Amore Care. The home supports people with dementia and Alzheimer’s. It is located in Wimbledon, southwest London.

Nicholas Kee Mew, Registered Manager, said: “We are delighted to have celebrated Hazel’s 100th birthday here at Arthur House. She is a remarkable woman with a warm smile and is always happy to partake in activities. We are so proud to have thrown her a birthday party to celebrate this milestone.”

Hayden Knight, Managing Director for the South East, said: “I am proud to see that Arthur House has once again made headlines for its fantastic care for residents. Everyone at Priory Adult Care would like to wish Hazel a wonderful birthday.”