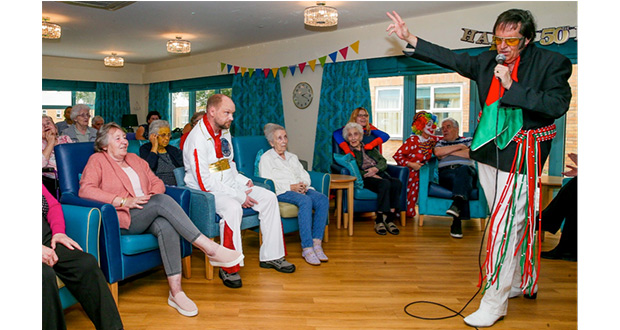 A care home resident who has a degenerative brain condition was All Shook Up when an Elvis impersonator who’s also a hospital chaplain popped in to sing Happy Birthday.

Rocking reverend Wynne Roberts, known as the Welsh Elvis, was the star attraction at Ivan Chambers’ 50th birthday party at the Bryn Seiont Newydd care home in Caernarfon where he’s lived for the past two years.

A number of the staff even came in on their day off to join in the festivities and entered into the spirit of the occasion by donning fancy dress, with Ivan himself dressing up as Elvis.

According to manager Sandra Evans, Ivan, a former taxi driver who hails from Bangor, is a very popular resident and they wanted to help him celebrate his landmark birthday in style.

When he’s not performing as the rock ‘n’ roll legend Wynne’s day job is as chaplain manager for the Betsi Cadwaladr University Health Board covering all its facilities across North Wales from his base at Ysbyty Gwynedd in Bangor.

Sandra Evans said: “Huntington’s disease is a horrible condition which kills nerve cells in the brain. It’s like being locked in and is a progressive illness. Sadly, there is currently no cure.

“Everyone wanted to help Ivan celebrate his birthday – 50 is an incredibly young age to have to live in a care home but Ivan takes it all in his stride and gets on with life the best he can.

“We know Wynne Roberts well and we are delighted he agreed to come in and perform his Elvis tribute act for Ivan, other residents and staff. Ivan is a big fan of Elvis music and it has been a lovely afternoon.

“Many staff members came in on their day off and in fancy dress to make it a real party to remember for Ivan.”

She added: “One member of staff, Michael John Morris, even took Ivan to Manchester United’s Old Trafford stadium in the last week as he is also a big Man U fan. The Huntington’s Society bought the tickets but Michael took Ivan in his own time.

“That was a birthday treat for Ivan and Wynne coming along today performing Elvis songs and getting everybody up dancing has just been brilliant.”

Care practitioner trainer Sue Evans dressed as a clown for the birthday bash and organised the party for Ivan.

She said: “We wanted to make his 50th birthday a bit special and I think we have achieved that!

“Ivan likes Elvis songs so we thought why not get the Welsh Elvis to come along and perform for him? Sandra, our manager, even managed to get Ivan an Elvis costume to wear so he’d look the part too.

“It’s been a real team effort with so many staff members coming in on their day off to help Ivan celebrate. I think we have given him a day to remember.”

Care practitioner Charlotte Foad, who dressed as Super Woman for the party, says Ivan is a special guy and she wanted to help him celebrate.

She said: “It is my day off but there was no way I wasn’t going to be here. Ivan loves his Superhero films so that’s why I came as Super Woman.

“Ivan is massively popular among all the staff. He’s such a lovely guy and to be struck down by this terrible condition at such a young age is tragic. No one should have to be in care home aged just 50.

She added: “It’s so important to keep Ivan active and inspired so he can enjoy life as much as he can and while he can.”

Ivan was unable to say a great deal but did manage to make it clear the day had been very special and that he’d really loved hearing the Elvis songs.