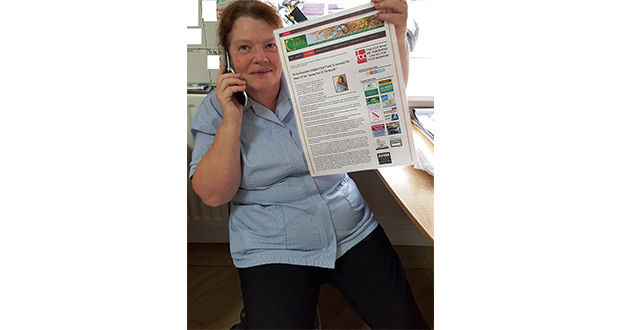 It has been one of the hardest jobs of the year, but we are delighted to announce The Carer “unsung hero of the decade is”……….. Mrs Tina Higginson of Sambrook residential care home in Newport. Tina wins a fantastic luxury two night break for two people in a choice of over 300 hotels nationwide!

Picking a winner has been an almost impossible task . As readers are aware we were celebrating our 10th anniversary and wanted to engage readers by nominating an unsung hero, somebody who goes that extra mile often time and time and time again, and which can sometimes be taken for granted.

We received many wonderfully inspiring nominations for individual carers, care homes and care institutions. Once again it has made us very proud to be part of such a magnificent industry, which does not get the recognition it so richly deserves!

We all found it quite a humbling experience to read of the devotion, commitment, hard work, warmth and affection individuals and teams in care environments have gone to enhance the lives of those they care for.

Once again it was such a difficult job picking an outright winner, so we have decided to add on two runners-up with two extra £50 Marks & Spencer vouchers!

We would also take the opportunity to thank all those who sent in nominations, all were deeply moving submissions and we are so very sorry that we could not give a prize to everybody 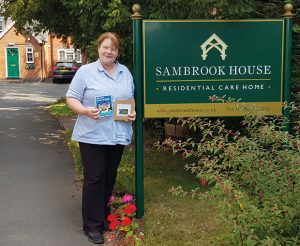 Our very worthy winner Tina Higginson of Sambrook residential care home, which is home to 28 residents. Tina has worked at the home for 26 years and described as a passionate “workaholic” often exceeding daily shifts working as housekeeper trainer and is a qualified carer with over 20 years experience. Tina was nominated by the home’s director Neil Robson who described Tina as being: “a fabulous mentor for new staff members, a fabulous cook who will step into the kitchen on the odd occasion coupled with phenomenal stamina and is, we consider ,the backbone of our organisation”.

Neil added “Tina is a natural carer demonstrating exceptional compassion, kindness and understanding particularly with the end of life situations, I’m delighted to nominate her for this accolade and am humbled by her commitment”.

Given the many humbling and deeply moving nominations we had to add to runners-up (we only wish you could have been more ) so we are delighted to announce that a £50 Marks & Spencer gift voucher is on the way to Chris Warry who is an “integral part of Abbey View Care Home” in Sherborne. Chris has worked at the home since 1997, and is still working in her retirement, even returning to help out after major surgery. Colten Care’s operations manager Martin Corrigan said “Chris has always been an amazing support to the team by over the years helping the staff through many difficult times. We all consider her to be the mother of the home. Chris is loved by all and I delighted to nominate her”.

And a £50 Marks & Spencer gift voucher is on its way to Thandeka Nkopo (Tandi) who is a RGN at Plas Y Mor Nursing home in Rhyl Denbighshire where she has worked for the past 16 years. The home provides care for younger adults who experience mental illness such as schizophrenia, bi-polar. Tandi has adapted her skills and experience in a challenging environment and was promoted to deputy manager in 2015. General manager Karl Roberts said: “Tandi has fully embraced this role and continues to provide excellent care and support in both her clinical role and as the deputy manager. She is an inspiration to Junior team members and an asset to the company. She supports the home with staff shortages, covers for nurses to have annual leave and often has put aside her personal commitments so that others can have time off work or, so residents can achieve their wellbeing.”