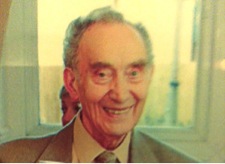 Alzheimer’s Research UK has received a gift of £3,000 from the late Idris Evans, from Totton in Southampton. Idris died with pneumonia in January 2015, aged 88.

He left the gift in his Will to the UK’s leading dementia research charity to give hope to people like his former wife, Marjorie, who was diagnosed with Alzheimer’s disease shortly before he passed away.

Idris moved to Southampton when he retired. During the Second World War he served in the RAF and trained as a fighter pilot. It was during that time, based in Lincolnshire, that he first set eyes on Marjorie, walking along the seafront at Mablethorpe. When they married in 1949 he joined the family business run by his parents-in-law, working briefly in their butcher’s shop. He went on to work as an engineer for an aircraft manufacturer before joining the Electricity Board. His love of aviation continued throughout his life and he enjoyed visiting air shows and museums at every opportunity.

Idris’ daughter, Jill Hodgkinson, who lives in Midanbury in Southampton, talked about her father’s reasons for leaving Alzheimer’s Research UK a gift in his Will:

“My father was a real gentleman, very kind and generous. It didn’t surprise me that he left gifts in his Will to several charities, including Alzheimer’s Research UK. He was very much aware and concerned about the impact Alzheimer’s has on individuals living with the disease and their families too. He was shocked to learn that there aren’t any treatments to stop it in its tracks and that funding for research lags far behind other serious diseases.

“I am proud that my father left a gift to Alzheimer’s Research UK to help defeat this devastating disease. Even though he’s no longer with us, it’s good to know that his generosity and compassion are still making a difference and giving hope to other people living with Alzheimer’s and other forms of dementia.”

“We are so grateful to Idris for remembering Alzheimer’s Research UK in his Will. His gift of £3,000 will help bring our scientists closer to finding new ways to diagnose, prevent, treat and cure Alzheimer’s disease and other dementias. We rely on public donations to fund our research and gifts in Wills pay for one in three of our projects. However big or small, these gifts allow ordinary people to make an extraordinary impact on our vital dementia research.

“There are 850,000 people in the UK living with dementia today, including over 19,500 people in Hampshire. Dementia poses one of the greatest threats to public health but research has the power to drive the next breakthrough.”