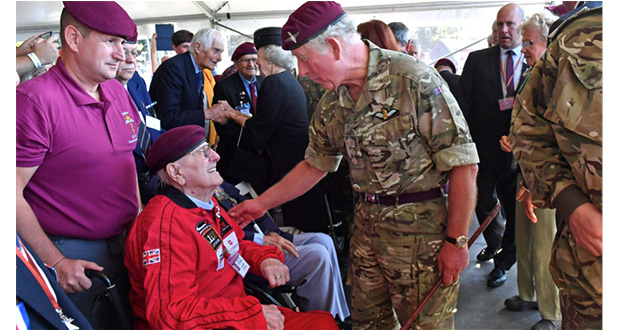 A 97-year-old Second World War veteran who parachuted out over the Dutch city of Arnhem where he was captured in 75 years ago has been congratulated by the Prince of Wales.

A crowd of thousands applauded Sandy Cortmann, from Fairrview House in Aberdeen, as he tandem dropped with the Red Devils on to Ginkel Heath, near Arnhem in the Netherlands, on Saturday.

He was just 22 years old when he parachuted on to the same drop zone in September 1944.

The Prince of Wales, the Colonel-in-Chief of the Parachute Regiment, accompanied by Princess Beatrix of The Netherlands, met veterans of the operation on Saturday, to mark its 75th anniversary.

After landing Mr Cortmann, still wearing his red flight suit and returning to the area for the first time since the war, waved to onlookers and a mass of cameras from his wheelchair as he took his place for a memorial service on the heath.

The Prince of Wales, wearing a multi-terrain patterned shirt and trousers and maroon beret of the Parachute Regiment, laid a wreath during the service bearing the handwritten message: “In everlasting remembrance, Charles.”

He later shook Mr Cortmann’s hand as he met several of the last band of surviving veterans from Operation Market Garden.

After speaking to the Prince of Wales, Mr Cortmann described his jump as “thoroughly terrifying”, adding: “When the door opened I thought, Christ, what a way down.”

But he said it was “absolutely wonderful to see the ground so far below, my God”.

Asked if the parachute drop had been like the one he made more than seven decades before, he said: “I can’t remember much about the jump in 1944, we were just a bunch of young lads out for a good time if you like, but it turned out rather terrifying in the end with the guns and mortars and things opened up. They were all aimed at us.”

Arlene Campbell, General Manager for Fairview House said: “We are all so proud of Sandy for being brave enough to do the jump again. He’s a wonderful man with such an incredible story, and we’re honoured to know him.”