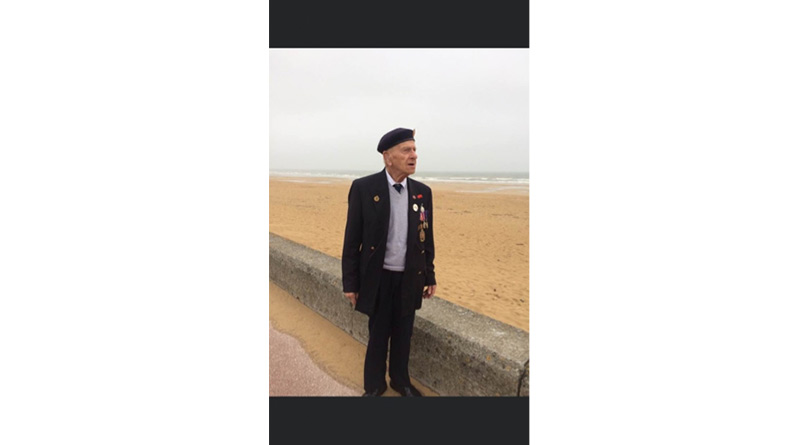 Royal Star & Garter in High Wycombe has thrown a special D-Day party for one of its residents, who took part in the Normandy landings 76 years ago.

Staff at the care home in Hughenden Avenue organised the tea party for George Avery on Saturday 6 June, on the anniversary of the D-Day landings.

The 98-year-old, who is known to friends and family as Bunny, was a Sapper in the Royal Engineers and built Bailey bridges throughout Europe to help support the Allied advance into Nazi-occupied Europe.

He was part of the second wave of British troops to land on Sword Beach on 6 June 1944. Bunny was dropped close to the shoreline by his landing craft, and as he made his way to the beach he “just kept running”. He remembers seeing bodies strewn on the sand and added: “I thought, ‘Keep your head down boy!’”

In 2016 he was awarded France’s highest military honour – the Legion d’Honneur – as thanks from the French government for his role in its liberation.

Today Bunny lives with dementia at the care home, which opened in 2019.

Staff arranged the tea party, with other residents also joining Bunny, while observing social distancing precautions. Photos of Bunny in uniform helped decorate the Home, and residents ate a special cake with his image on it, listened to music and danced.

Receptionist Cerys Walters said: “Bunny and the rest of the residents had such a lovely time. It was a true honour for us all to be with Bunny on such a significant day.”

Two years ago, Bunny visited Sword Beach on D-Day and posed for a photo taken exactly 74 years to the hour of his landing on the stretch of sand.