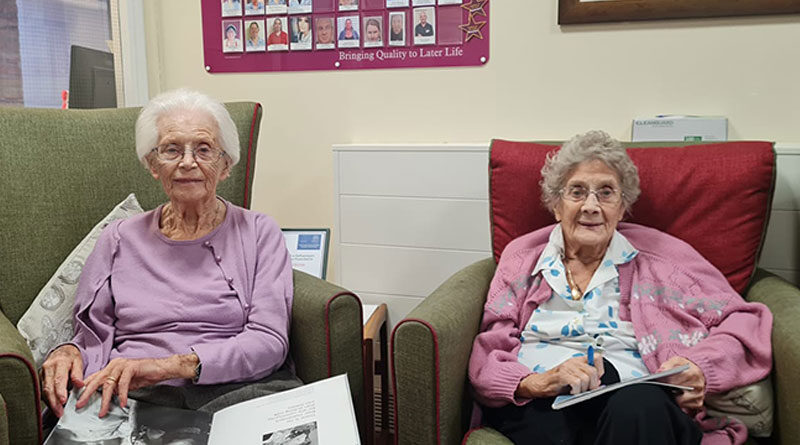 Dora Weaver (L) and Beryl Wornham (R) have been reunited at MHA Morel Court, more than 60 years after first meeting.

Two friends who met each other whilst working more than 60 years ago have been reunited thanks to a Penarth based care home.

Beryl Wornham and Dora Weaver both worked at the Salvation Army in Cardiff and “instantly” became friends.

They both stayed in touch with one another until Dora moved away and now, more than 60 years after meeting for the first time, they are both living at MHA Morel Court care home.

The home is situated in landscaped grounds a short distance from the seafront and one mile south west of Penarth town centre and offers 36 places for residential care.

Dora moved into the home last week and was recognised by Beryl, and once the home started to find out it was a huge but pleasant surprise

Beryl, 90, has lived at the home for five years and said: “I recognised Dora as soon as I saw her and it’s so nice to see her after a very long time.

“We instantly became friends when at the Salvation Army and shared the same humour which really helped.

“We have been friends for a long time and it’s been nice to catch up and listen to one another about what we have been up to since we last met.

“It’s been great seeing Dora again and I am very happy we have been reunited again.”
Dora, 93, said: “I have known Beryl for more than 60 years so it’s nice to see a familiar face in the home.

“We have been spending a lot of time together and I am glad to have met with her again.”
June Mansell, community coordinator said: “You can’t separate the two ever since they have met again.

“We have had instances in the past where couples have been reunited but I don’t think we have had anything like this before.

“Beryl was elated when she recognised Dora, and you will always see the two of them together when we are doing activities or when they are just spending time in the lounge.

“It’s great for the two of them and it just shows that you never know when you will bump into old friends again.”