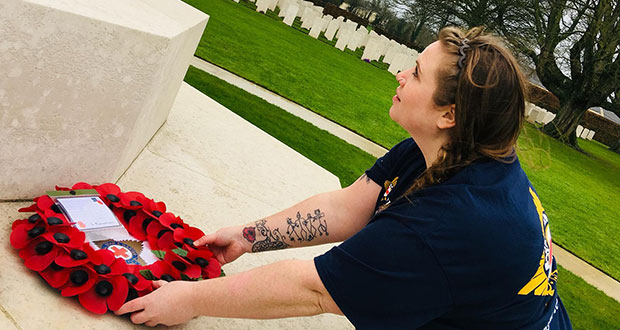 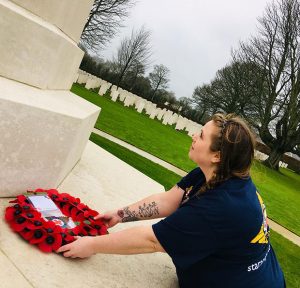 Veterans at a Solihull care home have paid tribute to the men who lost their lives on the beaches of Normandy, ahead of the 75th anniversary of the D-Day landings.

A wreath from The Royal Star & Garter Homes was laid at the memorial in the Bayeux Commonwealth Military Cemetery in France and signed on behalf of its residents. The Home cares for ex-Servicemen and women and their partners living with disability or dementia.

It was placed by Charlie Wilson, Activities & Volunteers Manager at the Home, on Friday, 15 March, and included a note written by Joan, a resident who served in the Auxiliary Territorial Service (ATS) – the women’s branch of the British Army – during the Second World War, and whose husband took part in the Normandy landings.

It read: “On behalf of all veterans of World War II, grateful thanks to our brave souls who gave their lives on the Normandy beaches 75 years ago to secure our freedom. We and the nation salute you.”

She said: “I come from a military family, with both my parents serving in the Navy and in the Falklands, so we’ve been brought up with a real respect for troops and services. And working at The Royal Star & Garter Homes, I have a huge amount of respect for older Servicemen and women.”

Along with the message written on the wreath, other residents also gave notes for Charlie to take with her to France. She said: “It was special for them that their messages and tributes could be taken to the memorial. D-Day is really special for a lot of residents, it means a lot for them. It was a lovely tribute.”

The D-Day landings, which commenced on 6 June 1944, was the largest seaborne invasion in history, and began the liberation of German-controlled France and eventually the rest of Nazi Europe.