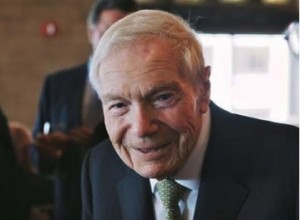 Jerome H. Stone, founder and Honorary Vice-President of Alzheimer’s Disease International (ADI), passed away on the 1 January 2015 at the age of 101.

As the President of the Alzheimer’s Association in the USA, Jerry Stone brought together the associations who founded ADI in 1984 in Washington DC. Over the years Jerry visited many of the ADI Conferences and when interviewed for ADI’s 25th anniversary book in 2009, he said: “I am proud of all these people that I have worked with and that ADI has grown far beyond my influence.” He gave his last formal presentation for ADI at the Alzheimer University on Public Policy and Campaigning in Chicago in 2010.

Jerry became involved with the Alzheimer’s movement when his wife, Evelyn, was diagnosed with the disease in 1970. Jerry recognized the need for an organisation that would provide support for people with dementia and their caregivers and advance research toward treatment and ultimately, a cure.

Jacob Roy Kuriakose, Chairman of ADI said: “Jerry Stone inspired us all to make the Alzheimer’s and dementia movement truly global, to be ambitious and think big and reach out to the global institutions. We will miss him a lot.”

Marc Wortmann, Executive Director of ADI added: “Jerry was very active in his role as Honorary Vice-President of ADI. I met with him a few times in Chicago in the last few years and was always touched by his ongoing enthusiasm and knowledge of the organisation.  I feel very privileged that I was able to meet Jerry and to learn from him.”

In 2006, Jerry received the very first ADI Award at the 22nd ADI conference in Berlin. Today we join together to send our deepest condolences to his family and to the many people in the global dementia community who knew Jerry and considered him a both a friend and an inspiration. We are eternally grateful for his huge contribution to the global dementia movement and thankful for his personal involvement in the establishment and development of ADI as an organisation.