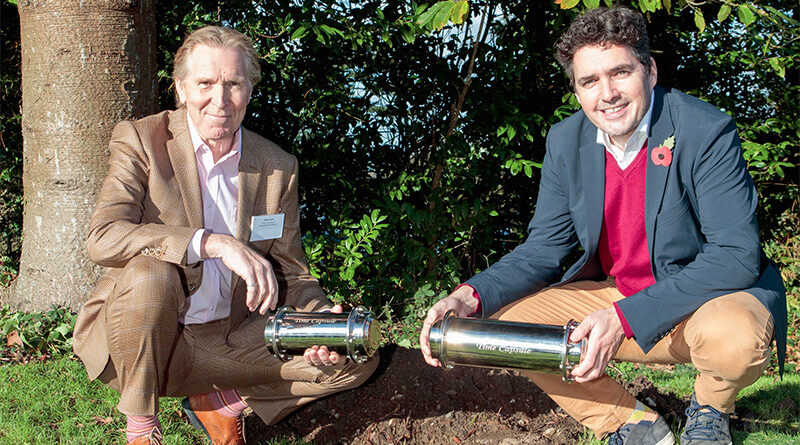 Local MP Huw Merriman, accompanied by Holdenhurst tenants and the Abbeyfield South Downs CEO Nolan Taylor, buried the capsule under the iconic Monkey Puzzle tree on Mill Road in front of the building, on Friday 4th November. It included items that illustrate what it is like to live in Heathfield in 2022, as well as the history of the building, donated by individuals and organisations from around the local community.

ASD is a registered charity that offers care-enabled housing for older people from the local community, is part of the worldwide Abbeyfield Family and its network of over 350 care homes, sheltered living schemes and independent living complexes, supporting over 8,000 residents.

Abbeyfields South Downs invited schools, community groups, businesses and residents of the town to contribute content for the capsules, including photography of Heathfield, drawings, poems, stories and videos from local schoolchildren, describing and illustrating what living in Heathfield means to them, as well as contributions from local societies and clubs. The capsules also included coins, stamps, a shopping receipt, front pages of national and local papers published on the day they were sealed, as well as a soil sample taken from the grounds of Holdenhurst in an airtight vial. The time capsules are marked by a plaque and will be dug back up in 50 years’ time.

Nolan Taylor, Chief Executive of Abbeyfield South Downs, commented: “We are extremely excited to bury the time capsules and have enjoyed working with the Heathfield community to ensure its contents are truly representative of what it is like living in this thriving market town. After the last couple of years everyone has had, it has been a fun and positive focus to bring the community together even more. Holdenhurst has long been a part of the community and local people will continue to play an important role at the affordable housing scheme. We thought of no better way to commemorate this by burying a time capsule.

“Over many years, the site has been a facility for older members of the community and in its most recent incarnation, Holdenhurst regularly hosted the local Age UK day centre lunches. We hope the new building will be similarly used by local community groups.”

The burial was followed by a launch party for its tenants, members of the Heathfield community and those who have played a role in the development as well as the time capsule, featuring a performance from entertainer Chris Jacobs.