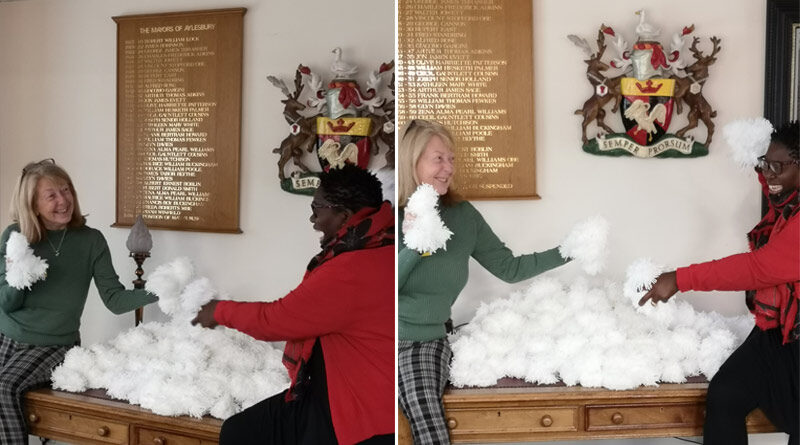 Earlier this year, Sue Faulkner, The Fremantle Trust’s Life Style and Wellbeing Manager contacted Ruth and Bea from Aylesbury Town Council to see whether The Fremantle Trust could support in any up and coming Christmas events within the Community.

The Council announced that Aylesbury town would be holding their first ‘Christmas on the Cobbles’ on Sunday 20th November and one of the exciting attractions will be snowball fights for families. Actual snow fall is highly unlikely, so the Council came up with an ingenious idea of substituting snow for ‘Pom Poms!. These little round balls of woollen tassels normally adorn woolly hats or waved by cheer leaders have an additional festive purpose in Aylesbury.

The residents within The Fremantle Trust’s Older People Services were more than happy to support and have been busily making many white Pom Poms with wool provided by Aylesbury Town Council.

The activity named ‘Operation Pom Pom’ has really proved beneficial for Fremantle’s residents living with dementia or with arthritic conditions of the hands. Due to the simplicity of making the little white tassel balls, not only has this been a social activity but the residents with higher care needs and those with nursing needs have also benefited.

Many residents from different Fremantle Care Homes enjoyed participating on the project and have become quite competitive by seeing who could make the most.

Along with The Fremantle Older Peoples Services, Aylesbury Age UK and Chiltern View Nurseries were involved. SSue Faulkner presented hundreds of Pom Poms in large bags in readiness for the big event on Sunday 20th November.

Resident Doreen at Lewin House, Aylesbury said “It was great fun and we are really looking forward to seeing the photographs of the snowball fights. Paying an active part in the local community is so important to us.”