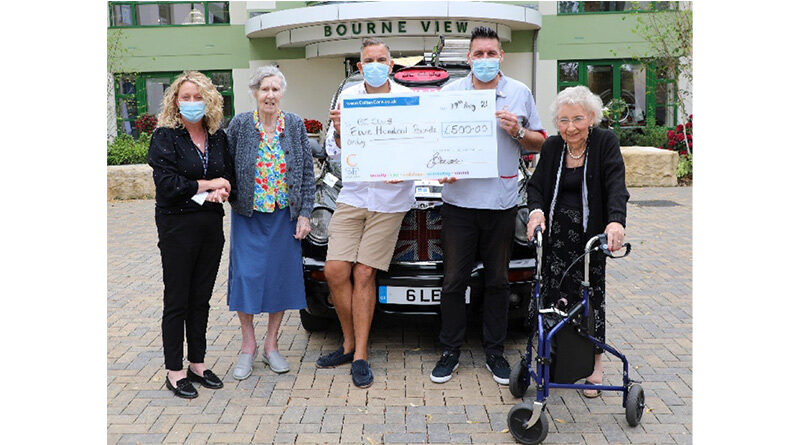 Care home residents have enjoyed a hands-on look at Dorset’s most eye-catching taxi, helping disadvantaged children in the process.

Colten Care homes Bourne View in Poole and Avon Cliff in Bournemouth both welcomed visits by the former London cab on a road trip aimed at raising £100,000 for Variety Wessex.

In an initiative by charity supporter the BC Club, business people are taking it in turns to spend a week driving the taxi around the conurbation, showing it off as they seek donations.

Each club member who drives the cab has to pay £250 for the privilege and make one addition to the vehicle.

So far these have included an outboard engine, a surfboard on the roof, fluffy dice on the rear-view mirror, a Dukes of Hazzard-style air horn and even a toilet in place of the passenger seat.

After perusing the vehicle, Avon Cliff resident Peter Kennard said: “I remember the days when we used to ‘ride a black’ in London, but they didn’t look like this one!”

The BC Club’s idea was born after chairman Shan Seewooruthun sold his own car and his fellow members got him a taxi for a joke.

They then decided the £1,500 LTI TX II Hackney Carriage could be used to make some money for charity, the main objective of the 12-year-old club.

More than £60,000 has already been raised for Variety Wessex, which provides support for sick, disabled and disadvantaged children.

By the time the Top Gear-style challenge ends in January, the BC Club members hope to have raised at least £100,000.

Steve Wells of DWP Housing Partnership and a club founder said: “It really is a great gimmick and puts smiles on people’s faces and that encourages them to donate.

“The most important thing is to help the disadvantaged children and we know that charities have seen their revenues reduce since the pandemic struck.

“Now is a really important time to help them and the taxi is one small way of doing that.

“We’d love people to give us a wave or a toot if they see the cab, and they can always donate via the BC Club’s website.”

In return for the visits to Bourne View and Avon Cliff, Colten Care has donated £500 to the taxi appeal.