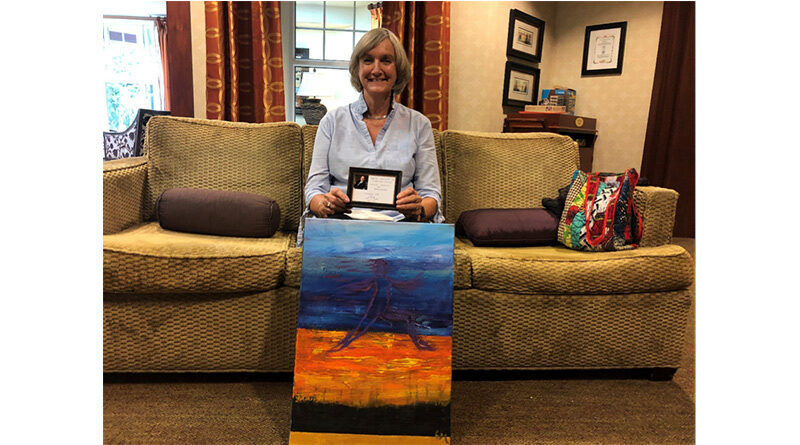 As the country celebrated the heroics of team Great Britain at the Tokyo Olympics this summer, Sunrise of Winchester recognised the remarkable life of their former resident and much-loved Olympic Medallist, Adrian Metcalfe OBE.

Adrian lived at Sunrise of Winchester for ten years, before passing away in July of this year.

During his career, Adrian set a UK record for the 400m in 1961 and won silver relay medals at the 1962 British Empire and Commonwealth Games, the 1962 European Athletics Championships and the 1964 Summer Olympics.

He then moved into broadcasting, as a commentator and then as Head of Sport at Channel 4, whilst holding roles on the International Olympic Committee and International Association of Athletics Federations. In 2001, Mr Metcalfe was awarded an OBE for services to sport and broadcasting.

Lynne Mayo, Adrian’s sister, has painted a beautiful artistic interpretation of his life and achievements, in his memory. The painting has been presented to Sunrise of Winchester. With the help of the Winchester Stroke Team, Lynne first found art while recovering from a stroke aged 64. She now hosts exhibitions of her artwork.

Upon retirement, Adrian resided at Sunrise of Winchester, where he became a valued and loved member of the family for ten years.

“Adrian was a lovely man with an amazing life history. An Olympic champion, circus ringmaster and TV broadcaster to name a few. Adrian continued running daily for as long as he could, and we enjoyed the one-to-one time with him taking him for his daily run. He shall be remembered fondly.”

“My lasting memory of Adrian was the way he played the piano so beautifully, the first time I heard him playing, I thought it was a CD. Also, the thing that really touches us is when the families are also close to us, Adrian’s sister Lynne and his Son Dan are so thoughtful and kind, it’s hard to lose them too.”