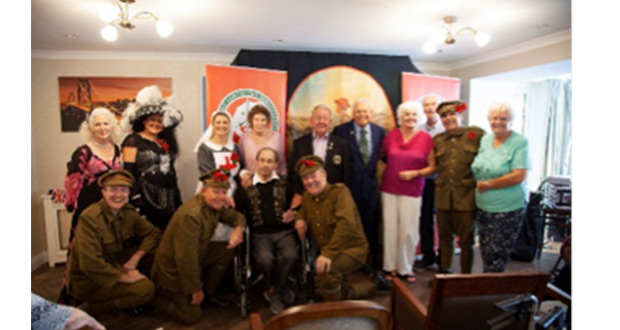 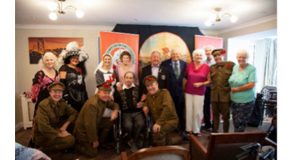 A group of professional entertainers put on a performance on behalf of the Not Forgotten Association for a Fairmile Grange care home resident, in recognition of him raising over £50,000 for serving personnel and veterans who are wounded, injured, or living with a disability or illness.

On Tuesday, September 18 Mickie Driver staged a performance at the Christchurch care home, with other professional entertainers from The Not Forgotten Association, to thank resident Roy King for the support he has provided over the years.

At the age of 18 Roy joined the RAF as an aircraft electrician in Transport Command in Abingdon, where he stayed until he was 23. A few years later in 1979, Roy moved to Bournemouth and joined the Royal British Legion in 2000. Following this, in 2006 Roy became a fundraiser for The Not Forgotten Association, which is supported by the Royal British Legion and a range of other causes.

Mickie, who is also a fundraiser of The Not Forgotten Association, regularly stages performances for the charity, with his group of professional entertainers.

As well as supporting Mickie, Roy and a small group of his friends also raised over £50,000 for the charity. This was subsequently acknowledged by The Not Forgotten Association and the Christchurch Borough Council, who presented Roy and his friends with a certificate, in recognition of their outstanding achievement.

Andrea Davey, wellbeing assistant of Fairmile Grange, said: “We were delighted to welcome Mickie and his talented team of performers into Fairmile Grange. Two years ago Mickie performed at Windsor Castle, where he helped celebrate the Queen’s 90th birthday, so it was a privilege to watch him and the other entertainers perform for us.

“Roy has achieved so many wonderful things over the years. Several of Roy’s friends from The Not Forgotten Association and Royal British Legion also came to support Roy and watch the fantastic show. It was lovely to see Roy being appreciated by so many friends. Not only was this a special day for Roy, but the entertainment was also thoroughly enjoyed by all of the other residents and guests.”