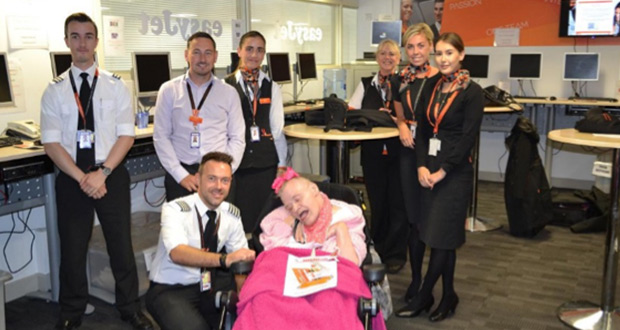 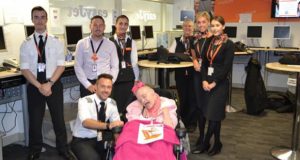 Sonia, living at Stocks Hall St Helen’s Home, has always spoken about being an Air Hostess if she wasn’t disabled.

Laraine Prescott, Holistic Therapist at the St Helen’s Home thought it would be an amazing idea for her to have her dream come true!

Laraine rang the airline and got through to a lovely gentleman called Phil Jones who works for Easyjet at Liverpool John Lennon Airport.

Phil and Laraine liaised with one another over the course of a few weeks… and the rest as they say is history.

Sonia received her own personal boarding pass which was her invite to meet Pilots and Air Hostesses in an Easy Jet Cabin Room.

At the Airport, the group were met by Phil and Lisa (Airport Staff). A photograph was captured of Sonia at this very special moment, next to the sculpture of John Lennon. On entering the Cabin Room, Sonia met a Pilot, a Captain and a group of Air Hostesses. Everybody in the Cabin Room made such a great fuss of Sonia, taking their time out to talk to her about her life. Sonia engaged with everyone confidently and happily.

Rodger the Pilot explained to Sonia about his flight and how long it will take him to get to Nice in France. They then both had a lovely conversation about where Sonia has travelled too in the world. All the team members made Sonia’s day very special; it was truly beautiful to see.

Then, Lisa came over with a uniform for Sonia that includes a pencil skirt, shirt, cardigan and jacket. Sonia also received a plane, a boarding pass and a few extra office bits. Then Lisa came back with a very important orange wing badge that is now attached onto her jacket. Sonia was delighted and ‘over the moon’. The Airport crew commented on how sweet she is, and her sense of humour.

Before the Pilots and Air Hostesses had to leave to board the flight to Nice in France, the team all wanted a photograph with Sonia. They were also so lovely when they were leaving, paying so much attention to Sonia. Before the group, they asked Sonia if they could have a picture of her in the uniform, and also a painting that she has done for their newsletter. Once again, Sonia was thrilled and felt like a VIP whilst there. She even said, “I feel like a Queen”.

A special thanks to the Team at Easyjet at Liverpool John Lennon Airport.