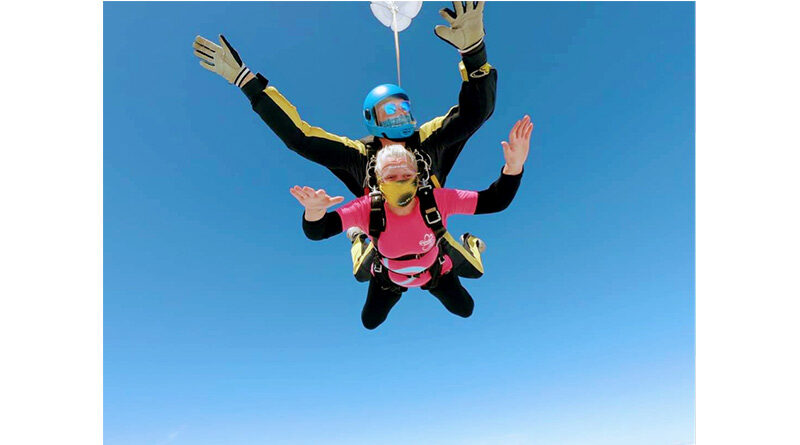 A relative of a Taunton care home resident has managed to raise over £2,340 for a UK dementia and Alzheimer’s charity after performing a skydive in dedication to her father.

Cheryl Clavey, who is the daughter of Oake Meadows care home resident Cedric Lewis, was inspired to raise the money by her dad, who was diagnosed with Alzheimer’s seven years ago.

Cedric currently lives at Oake Meadows, which is based on Wyvern Road, where he receives specialist support and personalised care programmes to suit his needs. The home is registered to care for 105 people and provides invaluable day and respite care for a variety of residents, including those living with dementia and learning disabilities.

Despite being terrified of heights, Cheryl took the decision to plunge 10,000ft from a plane to help raise money for Alzheimer’s Society, a care and research charity for people with dementia.

Initially, Cheryl set a target of raising £500, however thanks to her bravery, as well as the generosity of the local community, her jump managed to raise over £2,340 – almost five times her original target.

Cheryl said: “I wanted to do something special for a cause which is very close to my heart. I decided to do this skydive, as it’s something which is definitely out of my comfort zone. I am scared of flying and I am also scared of heights so I had a few sleepless nights thinking about it!

“Dealing with dementia and Alzheimer’s is one of the hardest things people will ever have to deal with. My dad was diagnosed with this awful disease seven years ago and it has been a pain that I can’t describe. I wanted to raise as much money as possible so that we can help prevent people from going through experiences similar to mine.

Louis du Toit, activities coordinator at Oake Meadows, said: “The work that Cheryl has done is truly astonishing. We were humbled and amazed at the lengths she went to for this worthy cause and her contribution will make a massive difference to the research and work done in the fight against Alzheimer’s and Dementia. Cheryl is a special woman and has always been very supportive and grateful for the care received by her dad at Oake Meadows.”