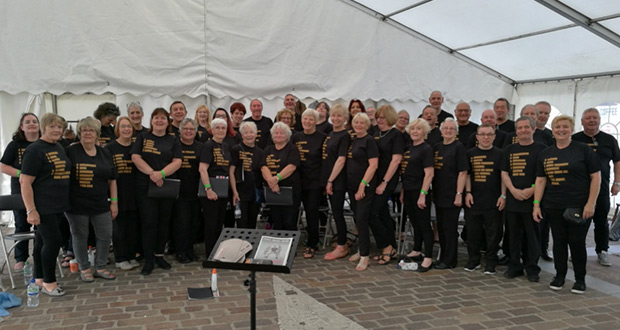 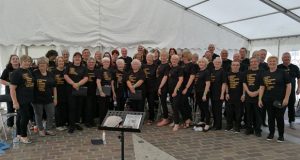 ELDERLY ex-servicemen and women living in care homes across Teesside were represented at a show to honour the survivors of war.

This Is Not For You took place at the Stockton International Riverside Festival, performed by veterans and backed by a forty-strong choir of local singers.

The show tells the story of wounded soldiers who returned from WW1 and were treated with less respect and honour than those who died.

A member of the show choir, Julie Walker took part as a tribute to the veterans living in care homes where she works, as well as in memory of her grandfather, John Godwin.

As customers relations officer for the Hill Care Group, Julie works at Ingleby Care Home, Mandale House Care Home, and The Beeches Care Home, all in the Stockton area.

She said: “I wanted to take part as a tribute to my grandad who fought in WW1 and for the ex-servicemen and women who live in our care homes.

“I feel that society often forgets the courage and sacrifice of previous generations. Armistice Day may remember the fallen but forgets the ones who survived and had to find a way to carry on.”

This Is Not For You is performed by members of Blesma, the limbless veterans’ charity, who have all been inured while on duty in the Falklands, Balkans, Afghanistan and Iraq, among other conflicts.

They returned from their tours with lost limbs and sight, post traumatic stress disorder (PTSD) and other injuries.

The performers are backed by local singing groups and choirs, including The Latte Singers, who regularly sing in Stockton music venue Whole Latte Love.

Julie, a member of The Latte Singers, said: “We all had to take a crash course in reading music – most of us couldn’t – but the fabulous musical director Andrea Brown brought out the best in all of us.

“Taking part was a humbling experience, watching the veterans – both men and women – acting and singing irrespective of their injuries was inspirational.

“My fellow singers felt that we had been privileged to have the opportunity to take part. And to represent Stockton while opening Stockton International Riverside Festival.

“The play was premiered at The Dockland Festival earlier in the year but from what the veterans told us they were astonished by the rapturous welcome they received from the people of Stockton.”