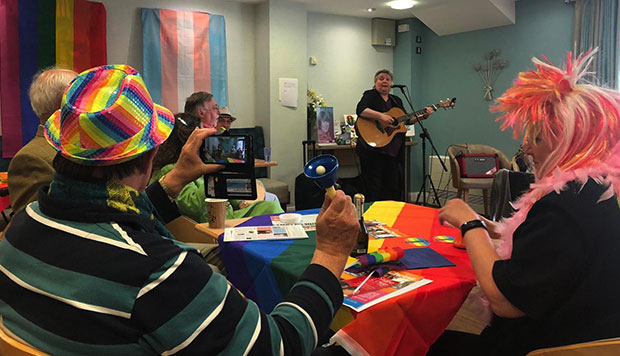 Care village, Belong Crewe, was awash with colour when it welcomed the local community for Silver Pride, a celebration of diversity, inclusivity and lesbian, gay, bisexual and transgender culture especially for the over 55s. This built on the success of last year’s Silver Pride event, Crewe’s first ever LGBT event for older people.

The event brought together local community organisations, LGBT groups, care village residents and members of the public for a full afternoon of themed activity, including musical performances, fancy dress competitions and open mic acts. Among those performing was popular North West singer-songwriter and equality and women’s rights campaigner, Claire Mooney.

As well as live entertainment, there were areas for people to reminisce about life in Crewe through the years, prompted by displays of artifacts from the history of the LGBT movement and the campaign for equal rights in Cheshire. People could also find information about the physical and emotional support available in the area for members of the LGBT community.

The event was intended to create a ‘safe space’ where older members of the LGBT community feel able to celebrate their individuality. It was supported by Cheshire East Council, Body Positive, Silver Rainbows and Connected Communities, the nationwide initiative aiming to enhance quality of life in the UK by providing events and services that bring diverse groups of people together and encourage community engagement. The Crewe police, fire and ambulance services and the Cheshire and Wirral Partnership NHS Foundation Trust were also represented.

Commenting on the day, Belong Crewe’s experience coordinator Natalie Ravenscroft, who organises the Silver Pride events, said: “With the village decked in rainbow colours and packed with residents and visitors celebrating diversity, the atmosphere was brilliant.

“Our first priority is making sure people who live at Belong Crewe feel at home. Events such as Silver Pride contribute to this by making people aware that they can be comfortable expressing who they are, whatever their background. We will continue to build on the success of this year’s Silver Pride with future events, as well as exploring other ways to support residents who identify as LGBT.

“I’d like to thank everyone who contributed to making the event so successful, including staff at Belong, local community organisations who attended and, of course, members of the public who came along.”