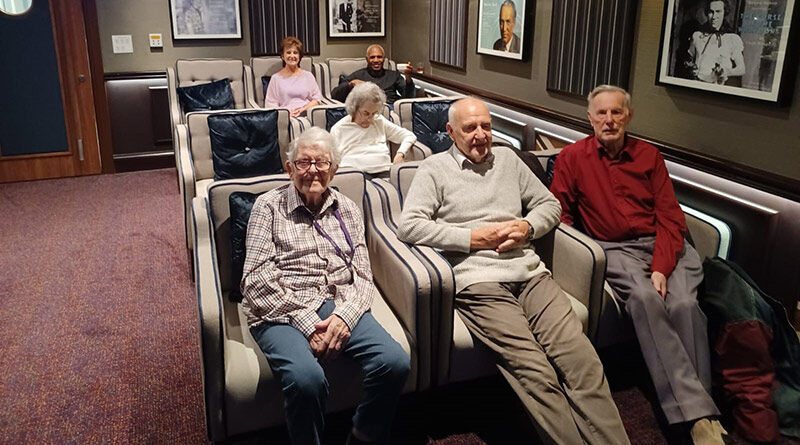 Signature at Elton House has found its perfect striking partner to build on the launch of the care home’s monthly cinema club at its in-house screen.

The Bushey care home received yet another visit last week from Luther Blissett OBE, a former Watford, AC Milan, and England striker for the next instalment of their Monthly Movie Club.

The club enables Elton House residents and members of the community living with dementia to sit back and enjoy old movies with one another in a comfortable and safe environment.

Luther, who received an OBE in the late Queen’s Platinum Jubilee Honours List, is a keen supporter of Watford’s dementia community and suggested the home’s in-house cinema played host to the Monthly Movie Club.

Since its special launch screening in July, attendees have enjoyed a range of movies from High Society to the iconic football-themed WW2 film, ‘Escape to Victory’. The latter proved to be a special showing with Luther being joined by other former Watford heroes Tom Whalley, Walter Lees, Ian Bolton, along with former Tottenham Hotspur man and prominent businessman, Bob Patmore.

The cinema club makes a vital contribution towards the home’s dementia care, helping its residents and community members re-connect with memories from the past, engaging the brain, and stimulating emotions.

Speaking about the monthly movie club, Karen Fleming, Client Liaison Manager at Signature at Elton House, said:
“The residents’ faces light up when they see and hear the old movies, they remember from their younger days, with some even singing along to the words in the songs. It melts my heart to see their smiles and hear their laughter. We are truly honoured to play our part in supporting with this community initiative.

“Dementia care is a crucial aspect of what we deliver here at Signature at Elton House. We know the incredible difference these approaches make in the lives of those living with dementia.

“We are delighted that we can provide a safe space that gives those at the care home and in the community an opportunity to enjoy the big screen.”

Reflecting on his experience, resident at the care home, Nigel, said:
“I enjoy Monthly Movie Club. We never know what film to expect but we have never been disappointed with the choices made!”