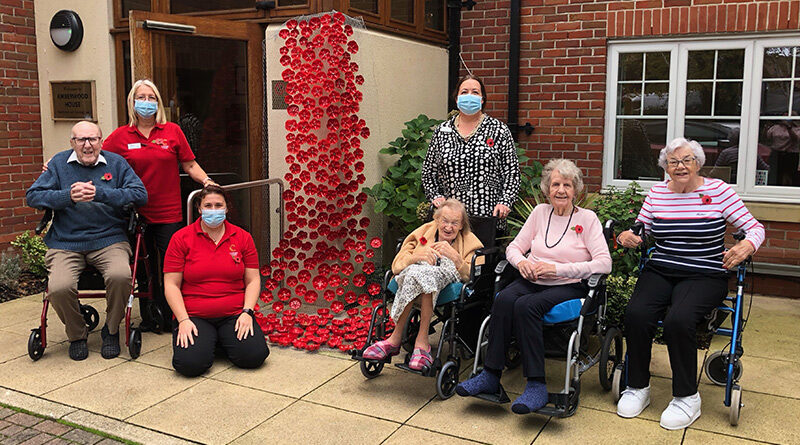 Residents at Colten Care homes in the south have knitted, sewn, crocheted, painted and sculpted thousands of poppies as heartfelt tributes for Remembrance season.

Many of the handmade works feature in outdoor hanging displays designed to prompt visitors and passers-by to stop and reflect.

As well as poppies, homes have held arts and crafts sessions in which residents – including many service veterans – have painted pictures on the theme of wartime sacrifice and shared their thoughts and memories with each other.

Residents at one home, Amberwood House in Ferndown, spent two months preparing an exterior floral ‘waterfall’ made entirely from the ends of recycled plastic bottles.

Companionship Team Leader Kirsty Richmond-Cole said: “It soon became apparent that the residents were addicted to creating the poppies and they started a factory line which consisted of stations for painting the first coat, drying with a hairdryer, adding a further coat, painting the poppy centre, further drying and then top coating.

“When they were all ready, I spent three evenings in the rain, drilling holes in the poppies, erecting the chicken wire, attaching the poppies to the wire with paper fasteners and creating the display. The finished result was worth it and amazing.”

Marjorie Hutchings, one of the residents involved in the artwork, said: “Creating such a large display was so enjoyable. It is beautifully eye-catching considering it is all made out of recycled plastic.”

In Salisbury, the finished display at Braemar Lodge in Stratford Road numbered more than 1,900 handcrafted poppies.

While most were made by residents, families, staff and close community contacts, the home also received donated poppies from as far afield as Scotland.

Resident Delia Bailey said: “I am an avid knitter so was delighted to have been part of this project. I started to knit poppies in August and made 140 in total. The display looks splendid and I thoroughly enjoyed doing it.”

The home’s Customer Support Advisor Tanya Williams said: “We were completely overwhelmed with the response to our call for poppies, including so many from friends in the community and anonymous donors.

“It has been a labour of love but the finished display has far exceeded our expectations.”

St Catherines View in Winchester collected nearly 1,500 poppies after it reached out to the community to help with a display.

Among those who responded to a Facebook plea from Companionship Team Leader Laura Sheldrake was a lady, Jackie Jenkins, who lives in Yorkshire.

Chris George, chairman of the Royal British Legion Winchester Branch, who visited the home to see the display, said: “It is important that everyone gets the opportunity to be able to remember our fallen heroes and Laura and her team have made sure that this can happen for the residents of St Catherines View.

“It was an absolute pleasure to be invited to the home and to meet some of the residents at the home, a very humbling experience.”

Footage of the discussions was shown to an audience gathered in the lounge, prompting Lauren Cooper, Companionship Team member, to say: “It was incredibly reflective and moving.”

One relative, Gill Knight, who was present, said: “I think it is great what they have done here. I heard the residents talking about their memories and it was just so special.”

Belmore Lodge also invited residents to make clay poppies and produce their own paintings on the subject of Remembrance.

Among activities at other Colten Care homes, residents at Bourne View in Poole painted poppy images on pebbles for distribution in the neighbourhood, Whitecliffe House in Blandford held a poppy-themed colouring competition with local schoolchildren and Newstone House in Sturminster Newton welcomed the Shroton Ukulele Band to play at a British-themed Remembrance afternoon.

A key aim is to honour veterans living in each home and families with current serving personnel.

At some homes, including Brook View in West Moors, Dorset, residents are invited to join official parades and services taking place in the community and to lay wreaths.