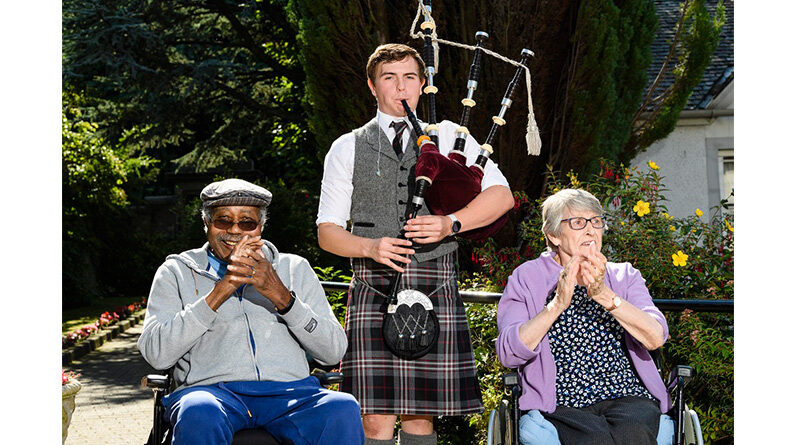 A LOCAL Edinburgh bagpiper has been moving care home residents to tears with nostalgic melodies.

The musical visit from piper, Matt McKelvie, was organised by dedicated care home staff at Mansfield Care’s Pine Villa in Loanhead after putting up a notice on social media.

Playing traditional Scottish melodies such as ‘Scotland the Brave’ and ‘Highland Cathedral’, the young Edinburgh piper is now returning for his second gig.

Matt McKelvie said: “I saw that Pine Villa was looking for a musician on social media and thought playing the bagpipes for care home residents sounded great.

“As things are getting back to normal and people start to socialise more, I think events like these are so important, as they brighten up residents’ days and they get to enjoy something a bit different from their usual routine.
“It was a lovely event, everyone really enjoyed themselves! Residents were dancing away and laughing, it was great.
“One of the residents used to be a minister for the Church of Scotland, so he asked me to play ‘Amazing Grace’ for him. It was truly heart-warming seeing his face light up when he heard the song.”
At 8 years old, Matt started private lessons at the Army School of Bagpipe Music and Highland Drumming at Redford Barracks.
His early passion for music was ignited by his grandfather who used to be a drum major for ‘The Argyll and Sutherland Highlanders’ and has been a leading role model and inspiration.
The young bagpiper added: “The best part for me was the way I made the residents feel, seeing them enjoy my playing truly makes me happy.
“I mainly have been playing at weddings and funerals, but after visiting Pine Villa, I am hoping that will change soon and I can play at a broader variety of events and celebrations.
Originally a hobby Matt is seeking to play full-time after he completes his higher education at Glasgow National Piping Centre.

Denise Williams, manager at Pine Villa, said: “Our residents had an amazing time listening to Matt and it was a delight to see them enjoying themselves and are looking forward to having him play again.”