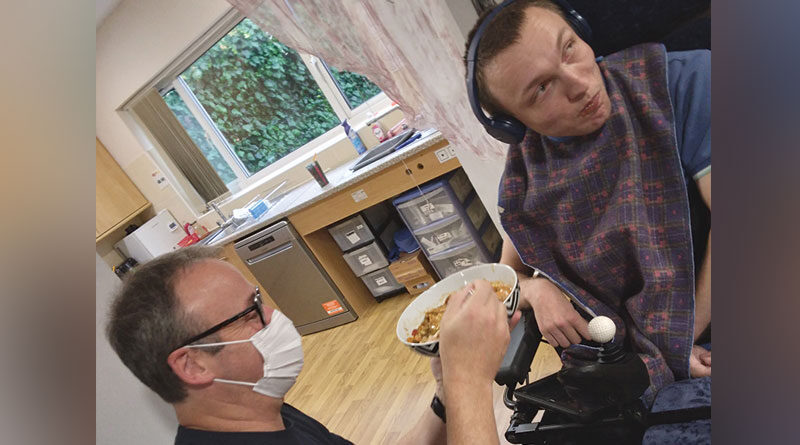 John Godden MBE swapped the top job for the shop floor in a new initiative launched by Salutem Care and Education.

The care organisation, which has more than 130 services nationwide, has introduced job swapping as part of its wider goal of improving transparency within the company.

The idea was born following a meeting between the executive team and members of Salutem’s Employee Listening Forum, who are elected representatives tasked with providing a voice for staff.

The Salutem CEO made the switch as he took on the job of Steven Gough, deputy Manager and personal carer at Oakleigh Lodge in Nottingham, which accommodates three individuals living with complex physical needs.

Working closely alongside Steve, John was able to help prepare the individuals for the day, including supporting them to go out into the community and getting lunch ready.

Steve will shortly be welcomed to Salutem’s headquarters in Windsor to try his hand at being CEO for the day.

John Godden, CEO at Salutem said: “By visiting Oakleigh Lodge, I was able to fully immerse myself in all elements of Steve’s job.

“As the day went on, I was able to better understand the hard work and commitment that is put in by Steve and all the other members of staff, who work in the service.

“Steve and his colleagues were very hospitable, and it was a real privilege to meet and spend time with the three individuals at the service.”

Steve Gough, deputy manager at Oakleigh Lodge said: “It’s not often you see a CEO getting stuck in and taking on someone else’s role for the day.
“John worked very hard and even stayed a couple hours more than he should’ve.

“I’m looking forward to taking on John’s role and working alongside members of the executive team in the near future.”

Stephen Gregory, a student at the service said: “I found John very friendly and good fun.

“He was very helpful and was good at what he did.”