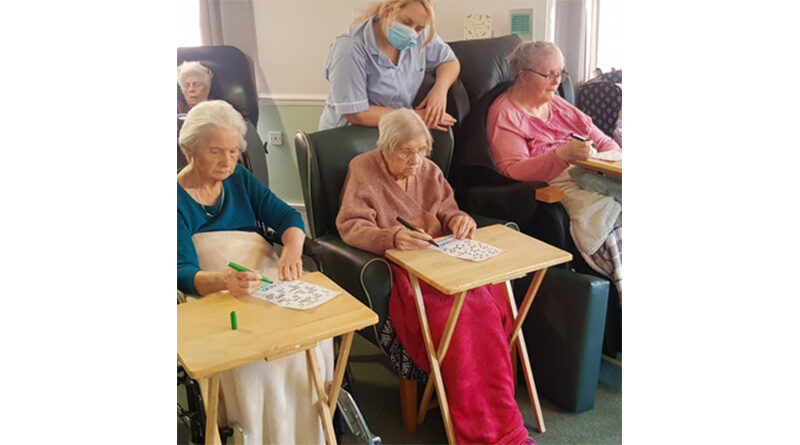 It was ‘eyes down’ for the residents at Moorgate Lodge in Rotherham as they attempted to win a full house during a game of bingo with callers from Mecca Bingo.

Residents at Moorgate Lodge care home dusted off their dabbers as they took on two fat ladies and two little ducks to become ‘top of the shop’.

Mecca Bingo contacted the home about providing residents with some remote entertainment. After dropping off dabbers and game cards in plenty of time for COVID-secure isolation, hosts from the bingo giant joined the residents via Zoom on Friday for an hour of lines, full houses and BINGO!

Moorgate Lodge is part of the Park Lane Healthcare family with capacity for more than 100 residents. Priding itself on the community atmosphere, the care village has dedicated activities coordinators who never fail to come up with new ideas to keep life exciting.

Oliver Smalley, aged 88, resident at Moorgate Lodge, said, “It is the first time that I have ever sat and played a game of bingo and I loved it! I used to be on the committee at the club but never played, it is now my favourite game because I won.”

Demi from Mecca Bingo said, ‘Mecca Bingo Rotherham wanted to help spread their bingo joy to others during these difficult times. We know that care homes have suffered severely through the pandemic by not seeing loved ones and having little entertainment or engagement from outside the residence. We have the facility to create virtual bingo and we are so pleased we can spread the bingo love!’

Samantha Sheppard, operations coordinator at Moorgate Lodge, said, “When Mecca Bingo invited residents at the Moorgate Care Village to take part in a round of bingo via Zoom, I knew we would have a full house. It was great to see the residents come together, even virtually, to take part.”