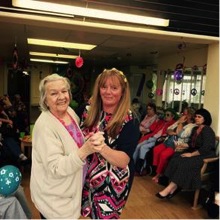 This included a celebration for residents at Mill Heath Nursing Home in Newport on 19th May.  Sparking memories from their youth, guests dressed up in clothing from the period and enjoyed music and food from the era, such as chicken goujons and apetito’s new chocolate éclairs.  The company also created posters and invitations to encourage the close friends and family of residents to join the celebrations.

apetito has an ongoing commitment to dementia-related causes and has launched a number of initiatives to raise awareness and money for the cause.  As well as supporting the Alzheimer’s Society as its first ever Charity of the Year, apetito provided food and marshals at a local charity walk organised by Alzheimer’s Support, a charity based close to its headquarters in Trowbridge on 24th May.  A recent car boot sale organised by apetito raised over £2,000 for the cause.

apetito is also supporting the Dementia Care Matters ‘S Factor’ events across the country this year and is encouraging and helping colleagues to train to become Dementia Friends, a nationwide network supported by the Government to help those living with dementia in the community.

“The 1950’s and 1960’s style parties during Dementia Awareness Week are a chance for care homes and residents to have fun, while emphasising the importance of social interaction for those with dementia,” said Ellen Brown, Divisional Manager, Care Homes at apetito.

“We see the harsh reality of dementia on a daily basis and our work throughout the year as advocates of good quality care for people living with the condition – including the importance of good nutrition in supporting their health and wellbeing – is a big focus of what we do.”

To find out more about catering to residents with dementia and how apetito can help, visit  apetito at the Dementia Care Matters S Factor events (www.dementiacarematters.com/sfactor) running nationwide throughout 2015.