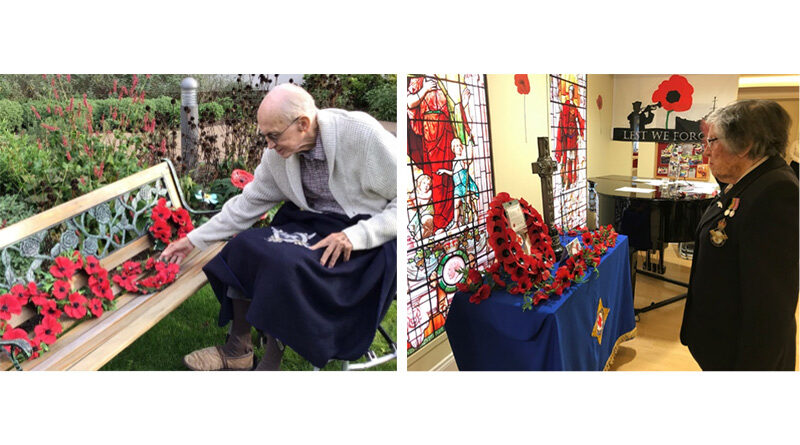 Royal Star & Garter has marked Remembrance with the veterans at its care homes.

The charity provides loving compassionate care to veterans and their partners living with disability or dementia.

Despite nationwide restrictions put in place to tackle the pandemic, socially distanced services took place at the charity’s Homes in Solihull, Surbiton and High Wycombe on Armistice Day, 11 November. They included readings, buglers and observing the two-minute silence.

It was the culmination of Remembrance events and activities taking place at the Homes in November.

Remembrance is one of the most important annual events for the charity, allowing its military family to pay their respects and remember loved ones and friends.

At Solihull, a bugler stood outside the Home to perform The Last Post and Reveille during the service.

In Surbiton, there were separate services on each of the Home’s three floors, to allow for social distancing. Tea and cake was later served to residents. There was also support from the local community, with nearby Shrewsbury House School laying a wreath outside the Home.

At High Wycombe, residents laid poppies and wreaths they had made in the Home’s Remembrance Garden, ahead of their Armistice Day service.

On Remembrance Sunday (8 November), veterans watched the annual service at the Cenotaph on TV. The charity was unable to have residents or representatives at this year’s service due to COVID-19 restrictions.

In the days leading up to the services, residents got involved in activities including war poetry readings and arts and crafts. At Solihull, residents took part in poppy crafting, while the Home in High Wycombe was decorated with poppies, wreaths and soldiers’ silhouettes, made by staff and residents. At Surbiton, veterans listened to Dame Vera Lynn in Music Club and made poppies which were displayed around the Home.

Royal Star & Garter marked Remembrance with its ‘Every face tells a story’ campaign.

Andy Cole, Royal Star & Garter Chief Executive, said: “As a veterans’ charity established during the First World War, Remembrance is always such an important time for us. We could not let the disruption caused by the pandemic stop residents and staff paying their respects in each of our Homes.”