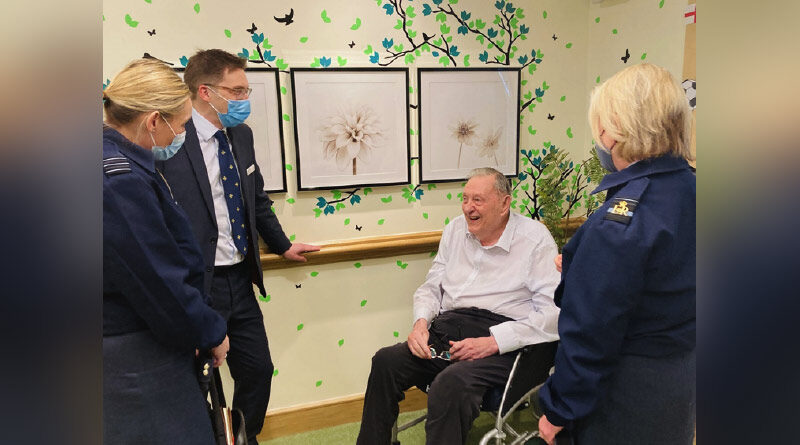 Royal Star & Garter is a charity which provides loving, compassionate care to veterans and their partners living with disability or dementia, and also has Homes in Solihull and Surbiton.

Wing Commander Dennis was given a tour of the state-of-the-art 74-room Home, seeing the nursing and dementia care on offer.

She then met residents, including pilot Neville, who served in the RAF for 37 years, and spoke to him about his long and illustrious career.

Since welcoming its first resident in 2019, Royal Star & Garter has forged a close relationship with RAF High Wycombe. Air crew are regular visitors to the Home, and last year a team washed cars at their base to raise money for the charity, while Air Specialist (Class 1) Jessica Webster ran 105km in less than 24 hours, raising over £1,000.

In October, the station’s charity committee announced Royal Star & Garter would be one of the charities it will support over the next year.

During her visit, Wing Commander Dennis praised the work of the charity and the person-centred care it provides. She said: “I’ve been really impressed with the facilities and the attitude of the staff, and it’s been an absolute pleasure to meet some of the residents here. I can see the care is on a personal level, how residents are supported and how happy they are. I’m speechless with what I’ve seen and really impressed with the support that veterans are getting at Royal Star & Garter.”

Royal Star & Garter Chief Executive Andy Cole said:
“We pride ourselves on providing outstanding care for the country’s military family. It’s an honour to welcome Wing Commander Dennis to our Home, so that she could see the award-winning care we provide to veterans and their partners. We are very grateful for all the support RAF High Wycombe has given the Home since it opened.”