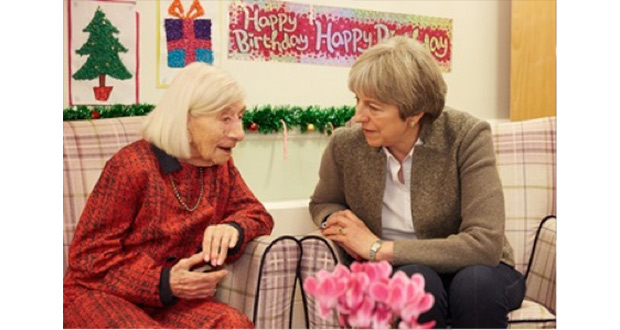 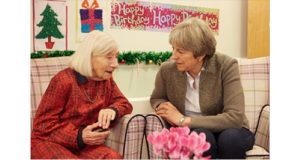 Theresa May took time out of her busy schedule this week to help one of her constituents to celebrate a very special birthday.

Irene Thompson, a resident at Clara Court care home celebrated her 109th birthday on 11th December, and as well as spending time with her family and friends, she was joined by special guests, Theresa and Philip May.

The Prime Minister and her husband visited the home, where they spent time chatting with Irene and her family, before joining the rest of the residents and the Care UK team in celebrating Irene’s landmark birthday. To mark the occasion, the home team held a special party, where Irene and the Prime Minister were the guests of honour, and there were plenty of treats and musical entertainment for everyone to enjoy.

Born in 1908, Irene lived in Richmond, South London, and has lived through two world wars. She remembers the death of the Queen’s father, and the Queen’s coronation, where she took part in the many street parties of the time.

Irene married her husband on 30th September 1939 at the Registry Office in Kingston, Surrey, and worked as a telephone operator, but had to give up her job during the Second World War. After giving birth to her son, Ian, Irene became a full-time housewife and mother. Irene was married to her husband for 61 years until he passed away, just before their diamond anniversary.

Irene remained living in her own home until she was 108, with occasional carers coming to support her, until she moved to Clara Court in January 2017. Irene said the secret to a long life is always being happy and content with life.

Debbie Winwood, home manager at Clara Court, said: “It was an honour to welcome Theresa May to Clara Court for what was an enjoyable afternoon celebrating Irene’s birthday. Irene was looking forward to celebrating with her family and friends, and there was a real buzz of excitement when the Prime Minister’s visit was announced.

“Residents are at the heart of everything we do here at Clara Court and we always like to make an occasion of important milestones such as birthdays. Irene had a really wonderful time celebrating with her family and friends, and we were delighted to welcome Theresa May and her husband who helped make the day even more special.”