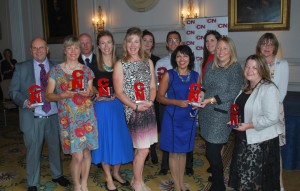 The team behind Nutrition and Hydration Week 2014 triumphed at the Complete Nutrition Awards this week when it raised the Outstanding Achievement Award.

The team leading the week – Caroline Lecko, Patient Safety lead for NHS England, Derek Johnson, Nutrition & Hydration Week lead for the National Association of Care Catering (NACC) and Andy Jones, Hospital Caterers (HCA) Association Chair – were quick to praise everyone involved in the winning campaign, stating, “It is through their hard work, dedication and determination to make a difference that made the week so successful.”

It was the creation and success of the first combined Nutrition and Hydration Week that took place 17-23 March 2014, which earned the week the deserved recognition and respect. The award, voted for by the dietitians and nutritionists working in clinical, medical and community care settings care, spotlights the achievements of those whose great work has made a significant difference within the nutrition industry, with the week fending off strong competition from other key projects including BAPEN’s Nutrition Screening weeks, to be victorious in the Outstanding Achievement category.

The aim of Nutrition and Hydration Week is to raise the awareness of the importance of good nutrition in health and social care and to illustrate how, by making changes to eating and drinking habits people can improve their quality of life. The campaign benefits professionals and staff within social and healthcare settings by showing them the preventative role they can play in catalysing a reduction in malnutrition-related illnesses that often require complex treatments, prolong recovery periods, delay hospital discharges and increase NHS costs.

Nutrition & Hydration Week 2014’s resounding success has enabled the campaign to be significantly developed and its reach broadened for 2015. Next year’s Nutrition & Hydration Week takes place 16 -22 March 2015 and the team has been busy contacting international colleagues to join the party. Interest has already been generated in over 20 countries, further building on the overseas participation in 2014. The target is for 32 countries to take part, creating a Nutrition and Hydration World Cup!

Caroline Lecko, Patient Safety lead for NHS England, commented on the award. “We are delighted to be recognised by our peers. The week is starting to make a difference in this vital area of health and social care. It is important that carers remember that nutritional intake, including fluids, is a key aspect of nutritional care.”

Andy Jones, HCA Chair, stated, “It is fantastic that our work has been recognised. We have come a long way in a short time, from what started out as an idea of a shared day with the NACC.  Joining with NHS England provided real impetus to move on this most basic but core aspect of good care. We have started the ball rolling, but it is yet to gain the momentum we need to make fundamental changes to how we view food and drink in health and social care.”

The NACC’s Derek Johnson, Nutrition & Hydration Week overseas lead, said, “The award will add impetus to the growing engagement overseas. This worldwide engagement also demonstrates wherever care and healthcare is provided, raising awareness of the benefits of good food and drink in enhancing quality of life and healing is an issue for everyone providing these essential services.”

Neel Radia, the NACC Chair, added, “The week has made a tremendous impact in health and social care, raising the profile of good nutritional care with whoever they come in contact with. I have seen the plans for 2015 and they are big – so if they have been recognised for the impact they made this year, then they really are a group of influential people to watch in 2015.”