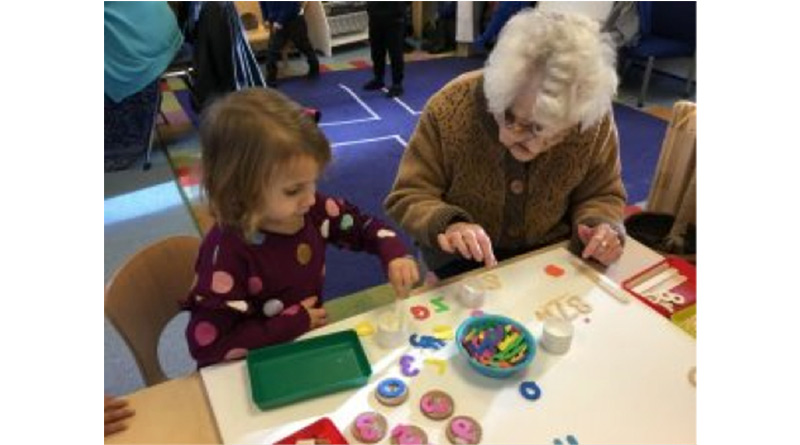 An Intergenerational project between a care home and nursery in Northfleet has blossomed, as regular visits see friendships and confidence grow.

Children from Northfleet Nursery initially visited residents at Dene Holm Residential Care Home in December, followed by a trip to the nursery for the care home residents to watch the children’s Nativity play.

In less than a couple of months, the project has flourished and this week, residents enjoyed a morning of crafting at the nursery with the children. Together they are working on a collage, which once finished, they will display in the care home.

One resident, Margaret Smith, who has thrown herself into the project and even volunteers to help the children read, said: “It’s wonderful, I have never been happier than I am now.”

Chris Hutchinson, General Manager of Dene Holm said: “The project started just before Christmas and we were so excited to see how it would develop. As we expected and hoped, it’s been really beneficial for both the residents and the children, they just love having each other around.”

According to a report by United for all Ages, Britain is one of the most age segregated countries in the world, so intergenerational projects like this play a vital role in changing attitudes to ageing, reducing ageism and providing significant benefits for all involved. Older people are given a sense of purpose and feel less depressed, whilst children see improved communication skills, including their language and social interaction.