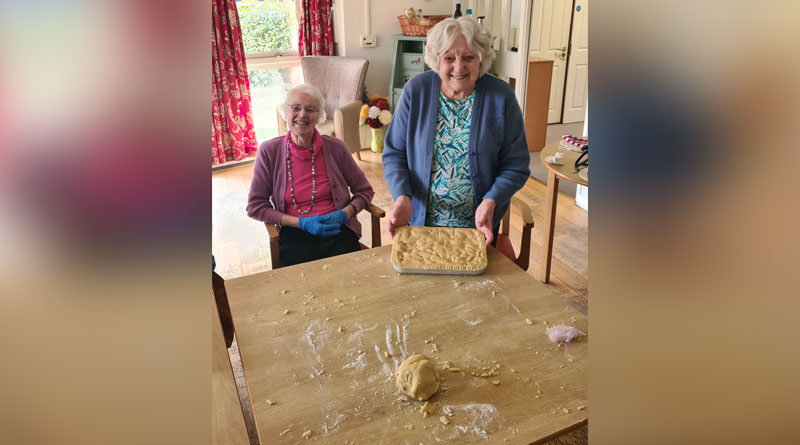 Residents and staff at MHA Norwood care home in Ipswich embraced British Pie Week by taking part in a variety of pie-themed activities.

There were several activities organised by the home, residents were given a selection of sweet & savoury pies to taste and were then put into teams and had to guess which ones they were.

Residents enjoyed watching a short documentary about some of the most famous pies from other countries around the world.

A small group of residents gathered around tables and made The Ultimate Apple Pie to have for dessert after their lunch.

Relatives were invited via Zoom to bake at home or just to watch and have general chit chat.

Anne-Marie Banks, administration manager at MHA Norwood, said: “I love celebrating Pie Week at MHA Norwood, the humble pie brings people together in so many different ways, enabling our residents to share their recipes and all the memories attached to them! We learn so much about each other”

Jean Woods, 93, a resident of the home said: “My favourite recipe is Apple and blackberry Pie.

“I used go out with her mother and pick the blackberries for the pie and remember my mother placing a crockery funnel in the middle of the pie before putting it into the oven.

“My favourite activity of the week was the Virtual Pie Making and it was nice having my son and daughter watching me make the ultimate apple pie.

Marc Cox, chef at the care home, added: “During Pie Week this year, the residents loved making pies from scratch. Sergio, our Activities Coordinator, arranged for a zoom session so loved ones could join in with the residents.”

MHA care homes from across the UK have been joining in with the national celebrations, which are held during the first week of March each year. The charity care provider’s mottos for the week are ‘Live Life, Eat Pie’ and ‘Happiness is Home-made.’