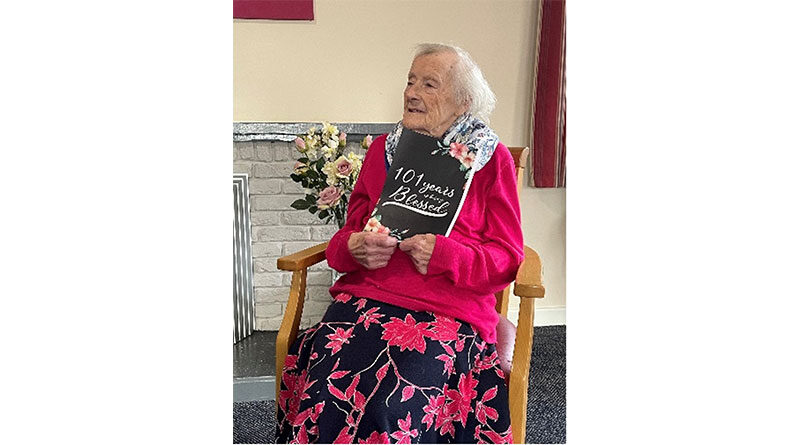 A care home in Newark is appealing to the local community to send 101 birthday cards to one of its residents before the end of January.

Gladys Welch is celebrating her 101st birthday at Red Roofs Residential Care Home on 29th January and the team are asking those living in and around Newark to come together to make it a day they will all remember. Birthday cards are a great way to show someone you are thinking of them and if the target of 101 cards is met, it will be the largest card delivery Gladys and the home have ever received.

Born in 1921 and originally from Collingham, Gladys lived in Bakers Mill – named after her mother’s family until she was 11. Later in life, Gladys worked at Webb Woollies before moving to Ransome and Marles, where she worked for a number of years. Whilst working at the factory during World War II, Ransome and Marles was bombed by the Luftwaffe, resulting in 41 fatal casualties. Gladys is a well-known bombing raid survivor and talks openly to staff about her life experiences and how she ran to air-raid shelters for safety.

Trish Smith, general manager at Red Roofs Residential Care said: “For Gladys’ 100th birthday we certainly celebrated in style, and it was a birthday we all remember quite well! Gladys received lots of beautiful bouquets of flowers, presents, cakes and 100th birthday balloons last year however, this year we wanted to go bigger and better but had to think of a Covid-safe way of celebrating such a fantastic milestone. Ideas came flooding in from various staff members, but we had to decide on one which will make the largest impact and bring Gladys so much joy.

“We are appealing to those in and around Newark to send Gladys a birthday card as we’d love if it there were 101 cards for her to open. We treasure every single birthday that’s celebrated here at Red Roofs, but this is one we really want some community backing. Gladys is part of the town’s history and what a better way to celebrate her life by sending her a small, thoughtful gesture. We cannot wait to see the array of birthday cards displayed across the home.”

For those wishing to send Gladys a birthday card please address the envelope to Gladys Welch, Red Roofs Residential Care Home, 35a Grange Road, Newark, Nottinghamshire, NG24 4LH. Senders are also being encouraged to include their names and location so all involved know how far and wide the appeal has reached. Any photos taken from Gladys’ birthday celebrations will be shared on Red Roofs’ Facebook page.