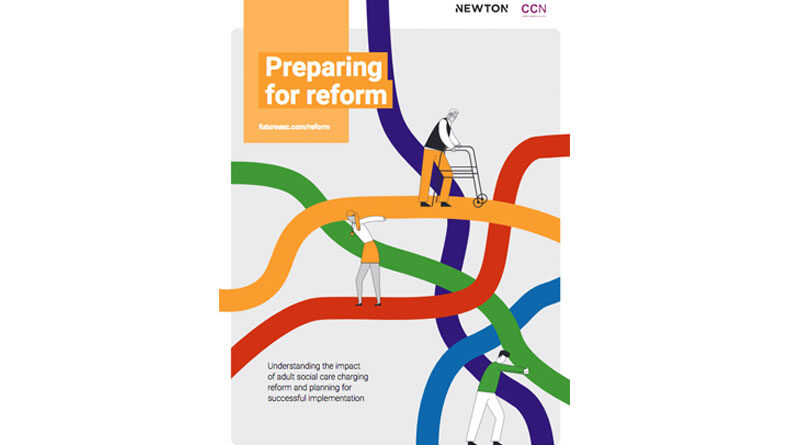 A new report reveals the regional impact on local authorities as a result of the government’s flagship adult social care reforms, concluding that the costs of these proposals could be significantly underestimated.

The analysis, released today by the County Councils Network (CCN) and Newton, provides the first independent analysis of the reforms, which include a more generous means-test, a cap on care costs of £86,000, a move towards a ‘fair’ cost of care, and the ability for people who arrange and fund their own care to ask their local authority to do it on their behalf.

The report estimates that the costs of reforms in the nine years from when they are introduced to 2032 could be a minimum of £10bn higher than currently estimated and could create a further workforce crisis in social care, with over 5,000 extra staff projected to be required to carry out extra care and financial assessments for those seeking to benefit from the reforms.

The report, Preparing for Reform, has been developed through extensive engagement with local authorities, providers, and residents alike, coupled with unique postcode-level analysis to understand the impact of the reforms across the country.
Download the report here.

Key findings include:
• The cost of the care reforms, including the cap and means-test for over 65s, new ‘fair cost of care’ and administrative overheads in England will cost a minimum of £25.5bn over the next decade. This compares to the government estimate of £15.6bn for the same elements of the reforms. The analysis suggests more people will benefit from some financial support under the means test and cap, meaning the cost of this element alone is £2.5bn higher than government projections.

• There is a significant regional variation in the costs of implementing the reforms, with councils in county and rural areas disproportionately impacted. Councils in England’s counties account for 57% (£14.3bn) of the total estimated minimum costs of the reforms over the next decade. This is compared to just 11% (£4.9bn) in urban metropolitan borough councils in the North and West Midlands

• Councils in county and rural areas could face the biggest financial and workforce challenges. Unless the government provides more funding and changes the way it allocates resources between councils, county and rural areas could face a minimum funding deficit of £7.6bn. Some 3,000 additional new social workers and financial assessors will be required in these areas, 60% of all new recruitment.

• In order to properly fund these reforms, the government could potentially need to spend half of the Health and Social Care Levy by 2032 on these proposals alone, irrespective of other social care pressures in the system. The report estimates that the total costs of the reforms could be between £5.6bn and £6.2bn a year by 2031/32. The levy will generate an extra £12bn in annual revenue earmarked for both the health service and social care, but only £1.2bn in each of the next three years has been committed to these social care reforms so far.

A separate survey of CCN councils for the report found that almost two-thirds of councils felt that they were ‘not well prepared’ for the reforms due to funding shortfalls and a tight timescale of implementing them from October 2023. Just over three quarters (77%) said that they would be unable to allocate any more resources from other service areas to pay for any financial shortfall, whilst nine in ten (91%) said they were ‘very concerned’ they will be unable to recruit enough staff.

Councils say recruitment on this scale will be ‘impossible’ and they will need more funding to attract more staff, alongside extra time to implement the reforms by transforming their working practices, including greater digitisation of assessments to streamline the process.

Facing a funding shortfall, and a workforce crisis next year, two-thirds of councils support delaying key aspects of the reforms beyond next Autumn, rather than a ‘big bang’ of introducing all of them at the same time. This would give councils more time to transform their services in anticipation of the extra assessments required, including greater use of technology. The report also calls on government to urgently invest in a national recruitment and workforce development campaign for local authorities and providers.

Failure to do so could result in individuals facing even longer waits to get a care package. Presently, there are over 500,000 people waiting for an assessment – and councils will face further administrative pressures from the reforms from next October.

Councils will also face significant unfunded cost pressures, particularly those in counties. The report calls on government to fully fund these reforms based on its financial projections and to re-examine its funding formula which will distribute funding for the reforms. CCN is calling for this formula to be overhauled to account for county areas being particularly exposed to the costs of reforms.

Cllr Martin Tett, Adult Social Care Spokesperson for the County Councils Network, said:
“There is clear support from local government for the government’s package of social reforms, which will make the system fairer and ensure that more people do not face catastrophic care costs.

“Local authorities are also facing a mountain of extra assessments required for the thousands of people who will approach their local authority to benefit from the reforms and it will be almost impossible to recruit the extra staff required.

“Therefore, the government must fully fund these reforms, incorporating the substantial extra cost they are likely to generate for councils so we are able to set balanced budgets in the future. Importantly, instead of a big bang introduction to the reforms, today’s report calls for them to be phased to give local authorities enough time to mitigate the challenges and give them enough time to transform and prepare for such a momentous change.”

Daniel Sperrin, Director at Newton, said:
“Newton is pleased to have partnered with CCN to carry out this analysis of the impact of the charging reforms. It is evident that whilst offering clear benefits for residents, the reforms will have a profound financial and operational impact on local authorities and providers. We hope that the findings and recommendations from this report will help both local and central government to prepare to implement the reforms, and so help realise the opportunities that they present.”