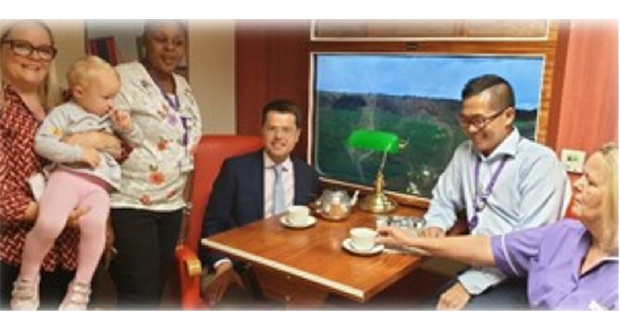 The Railway Rempod is a reminiscent OR reminiscence scene that creates the feel of an authentic train carriage with replica furniture, decoration and accessories that takes people with dementia back in time and on a journey through their local landscape. The Rempod has transformed an entire room to create a familiar and stimulating environment for residents which can relieve boredom and depression whilst improving mental wellbeing and help with memory loss.

Home Manager, Nicolas Kee Mew commented, “We were thrilled James could join us for the official opening of our rail carriage. We have had our eye on the Rempod for some time as we have many residents at Riverdale Court who used to commute to work by train. We felt that a rail carriage would be a great way to help evoke memories of working and commuting which would then spark conversation and support interaction between residents…

He continued; “Often we have found the simplest of topics can lead to
lengthy conversations and discussions at Riverdale Court. I am pleased to say the Rempod has done just that and we have already seen an increase in
interaction with residents who in the past have been less inclined
to be involved with activities”

Commenting, James said: “I was delighted to open this new Rail Carriage
Rempod at Riverdale Court Care Home which adds to the already warm,
welcoming and caring environment at the home. The installation will make a great addition to Riverdale Court and will play an important role in creating a stimulating and enriching environment for residents.”

He continued; “I would like to thank the fundraisers and all of the staff at Riverdale Court who worked hard to make this installation possible and who contribute to making the home the special and happy place it is all year round.”