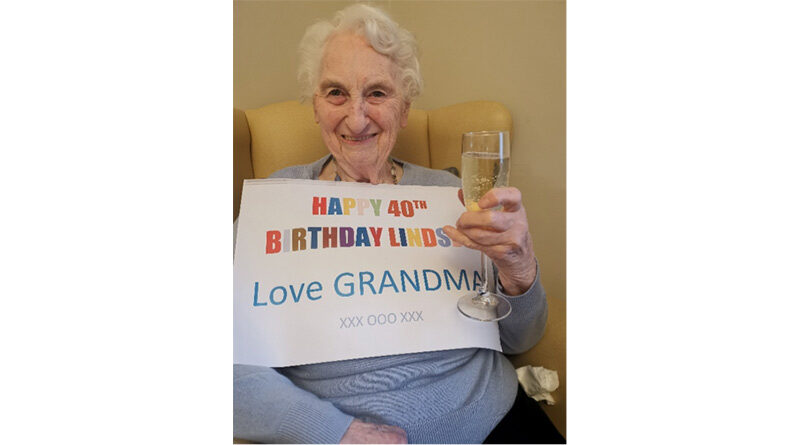 One Resident celebrated her Granddaughter’s 40th birthday with a heart-warming video message at HC-One’s Foxton Court care home in Northumberland.

Due to stroke damage, Fay Nicholson, unfortunately struggles to verbally communicate. But this didn’t get in the way of her sparkle when she decided to film a beautiful birthday message for her Granddaughter Lindsey’s milestone birthday.

Due to the coronavirus pandemic, Fay was unable to wish Lindsey a happy birthday in person. However, with a little help from her daughter Elaine and Colleagues at the home, she still celebrated the day in style.

Fay enjoyed a whole morning of being pampered before choosing her favourite outfit, paired with her fancy beads to look the part.

One of Fay’s fondest memories is sharing midnight feasts with Lindsey when she slept over as a child. Colleagues helped Fay to make posters regaling this uplifting story.

Colleagues then recorded a few different videos as Fay told her story with the posters, all while giggling and sipping on a celebratory glass of prosecco.

Elaine, Fay’s Daughter, said: “The videos are absolutely fantastic! I’ll choose one for the big day and then show her them all after her birthday.

“Thank you so much to the staff.”

Fay’s clip will be added to a video of Lindsey’s friends and family, all wishing her a happy birthday on her 40th.

Filming the birthday message made the day special not only for Lindsey, but for Fay as well and her laughter could be heard all the way down the corridor.

Foxton Court Wellbeing Coordinator, Stacey Hogg, commented: “I have a good rapport with Fay and it was a pleasure to be able to do this for her and her family. It was lovely to watch.”

Stacey and her Colleagues received a big box of chocolates from Elaine, thanking them for all the effort they put into making the video with Fay.