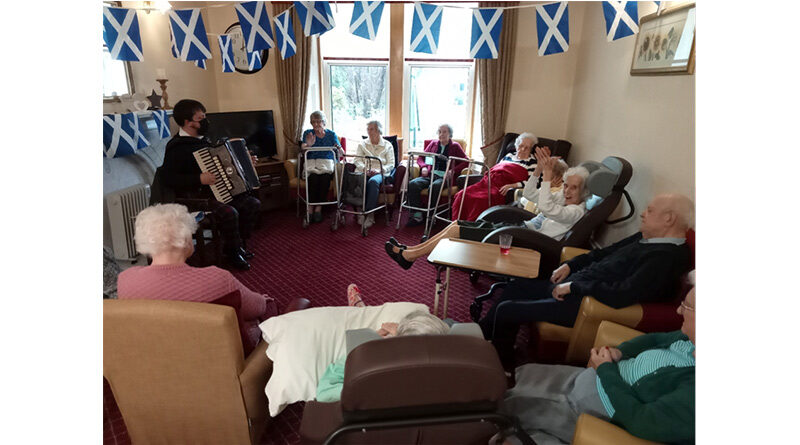 AN AWARD-WINNING Scottish accordionist will dazzle residents at a Loanhead care home every month.

Matthew Maclennan will play traditional Scottish folk music, including favourites such as Skye Boat song and other Scottish Jigs and many more to the residents at Mansfield Care’s Pine Villa.

The multi-prize winner has been performing at functions regularly since the age of 15 and will now become a familiar face around the care home.

Matthew is a three-time champion at the National Association of Accordion and Fiddle Clubs Festival, and has picked up prestigious awards at Highlands and Islands Music and Dance Festival.

Matthew, who is originally from Kiltarlity in the Highlands, said: “It’s great to be able to entertain the residents. Due to the pandemic, some of them hardly got to see their families so I’m very grateful to be able to bring them that extra bit of joy.

“I was performing outdoors for Pine Villa towards the end of the summer and the residents at the home seemed to really enjoy it, so it is great that I’ll be there a bit more regularly.

“The entertainment industry has been shut for so long now so as a full-time musician it has been hard. I’m just very happy to be back playing again and bringing some music to people’s lives.”

Sandra Wood, a 76-year-old resident at Pine Villa, said: “It brings me and the other residents so much joy to hear great traditional Scottish music being played live in our home.

“I’m so glad that we are now getting regular musical visits, it makes it more than just your average care home!”

Mansfield Care continue to go above and beyond for its residents with this being the latest of a string of celebrations and occasions to keep spirits high around its homes.

Denise Williams, Manager at Pine Villa said: “To have Matthew performing on a more regular basis is brilliant news. He’s won so many awards for a reason. He’s extremely talented and the residents absolutely love him and his music.

“Alongside Matthew, we now also have a regular piper who plays every month as well. The residents love when our musical guests visit.