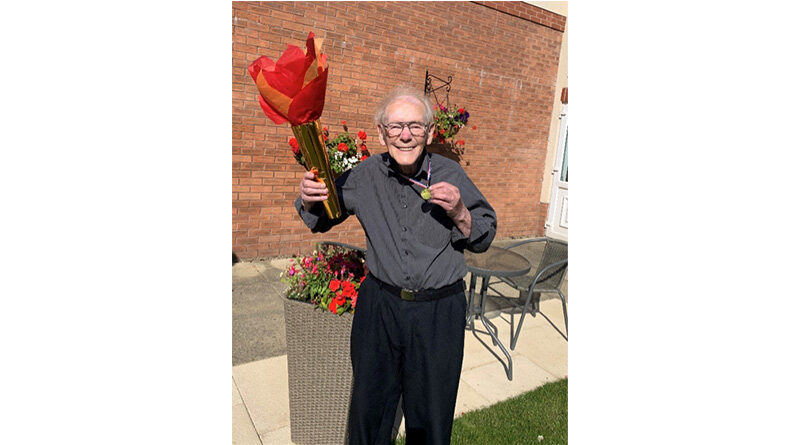 In the spirit of the Tokyo games, carers at Ashworth Grange in Dewsbury, have been celebrating their very own gold, silver and bronze medallists after taking part in their own specially designed Olympic games.

Staff pulled out all the stops to launch the games with an opening ceremony, recreating the infamous passing of the torch. The home has been decorated in handmade garlands including an impressive Olympic rings mural and residents wore team GB shirts, waved flags and banners and even enjoyed a taste of Tokyo with a classic Japanese tasting menu.

As the games began, it was clear that team poppy athlete, 93 year old, Bill Atkinson, was hitting a home record for gold medal triumphs, with an impressive 3 wins. He said, ‘Our Olympic games have been a blast, it has been brilliant to take on a new challenge every day and to win gold medals along the way has been the cherry on top!

I think at my age it is very important to continue to stay in good physical health and our games have been a fun way to get up and moving. We have cheering on our GB teams on the television, and I am so proud of how many Yorkshire athletes have secured medals this year. I am now looking forward to our closing and medal ceremony – if our Olympic launch party was anything to go by, I know it’ll be a day to remember!’.

Organiser of the games, Lifestyle Manager, Collette Senior, has been documenting the Olympic games on social media, including an uplifting TikTok video on their viral account which has received over 2.5 million likes to date.  There have been many heart-warming comments from the athletes’ friends and families cheering them on, sending message of encouragement and congratulations.

Colette said, ‘Hosting our own Olympic games has been fantastic there’s been a brilliant atmosphere, filled with friendly competition, around the home! Over the course of the competition, we handed out 24 medals, with Poppy team taking the most medals with an impressive three golds, two silvers and three bronze.

The games have been the perfect way to bring everyone together and stay fit and active.  In the run up to the events we hosted practice sessions, with our care team coaching resident athletes ready for the real event. We’ve now got the closing ceremony to look forward to where we plan to honour all  our competitors with their medals and a special prize!’.