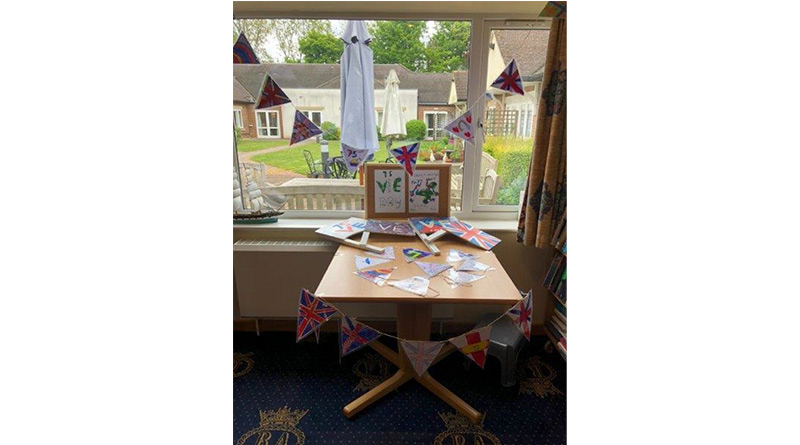 Staff and residents at Surrey-based maritime charity and nursing care home, The Royal Alfred Seafarers’ Society, commemorated a very special VE Day 75 from afar this year with the help of some local school children.

With residents and tenants at the Royal Alfred currently in isolation, pupils from Woodmansterne Primary School in Banstead, Surrey, decided to show their support by creating VE Day flags and posters to help raise spirits. The Society used the children’s designs to decorate its Belvedere House care home in commemoration of the 75th anniversary of the end of the Second World War in Europe.

The primary school, which provides education for children aged four to eleven years old, is currently teaching a handful of Surrey children as the COVID-19 pandemic has led to schools remaining open only for the children of key workers. The Royal Alfred’s activities team created educational activity packs for the children to learn about the significance of VE Day and to hear some of the residents’ memories of when the news first broke on 8 May 1945.

The Royal Alfred Seafarers’ Society has provided housing, residential and nursing care to former seafarers, their widows and dependants since 1865. VE Day is an important day in the charity’s calendar as many of the Society’s residents and tenants can remember the momentous announcement of the war in Europe being officially over and the nation-wide celebrations that followed.

Royal Alfred resident and former Wren (Women’s Royal Naval Service) Joan Traverse-Healy, said of her VE Day memories: “I went to London with my friend who was also a Wren to see the fireworks! I remember having to walk home as all the public transport was packed. It was a very important time in our lives. Our soldiers were coming home.”

Dennis Hedges, a resident at the home, reminisced about 8 May 1945: “I went to a Tooting pub called The Fountain Head, after coming out of the Merchant Navy. I was due back only two days later. We celebrated in the pub where all the windows were blown out due to bomb damage. I distinctly remember a piano being played from the top floor.”

Chief Executive of The Royal Alfred Seafarers’ Society, Commander Brian Boxall-Hunt OBE, said: “Now more than ever – despite being unable to come together in person – it’s important that we maintain our community spirit and unite in remembrance of all those who made sacrifices and in commemoration of historic milestones like VE Day. This year’s celebration really demonstrates the importance of staying in touch with loved ones and communicating with neighbours, as well as just how uplifting community spirit can be. Here at the Royal Alfred we are lucky enough to be able to listen to stories of those who were alive and remember the end of the war.

“It’s vital we teach the younger generations the significance of the end of World War II in Europe and that we honour the sacrifices made by those who fought for their country, not forgetting the contributions also made to the war effort by the thousands of mariners at the time.”