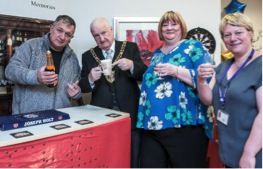 The Lord Mayor of Manchester, Cllr Paul Murphy OBE, officially launched a North-Manchester support service for people affected by dementia and signed up to the Dementia Friends campaign this week.

Cllr Murphy opened the new ‘Dementia Café’ at EachStep Blackley, an award-winning service that has been recognised as a national centre of excellence for dementia care. He was joined by the acclaimed Manchester comedian, Smug Roberts, star of TV’s Mrs Brown’s Boys.

The EachStep Blackley Dementia Café is a monthly event that offers people who live with the condition, and their loved ones, a fun and informal place to share their experiences, receive expert advice and relax. It takes place on the second Wednesday of each month, from 11am-1pm, and is completely free and open to the whole community.

Today’s launch event was attended by 40 people. Guests enjoyed a stand-up comedy set by Smug Roberts, who is a dedicated supporter of EachStep after his mother, who recently passed away, lived at the home. The Lord Mayor and guests also signed up at the event to the support the national ‘Dementia Friends’ initiative, which is backed by The Alzheimer’s Society, after participating in an interactive session that explained ways to best support people who live with the condition.

Lord Mayor of Manchester, Cllr Paul Murphy OBE, says:  “This monthly dementia café will make such a difference to local people dealing with the challenges of living with and caring for people with dementia. I have enjoyed gaining a better insight into dementia care, and seeing the support and facilities available at EachStep.”

He continues, “It’s been a pleasure to be a part of the Dementia Friends workshop today. Seeing the community come together to share in and support such a worthwhile event was brilliant. I am extremely proud to have become an official Dementia Friend. I hope many more people will participate in one of the workshops planned in and around Manchester, and join me in becoming a Dementia Friend.”

Michelle Phillips, Manager of EachStep Blackley, says: “It was a great honour to welcome the Lord Mayor to the official launch of our dementia café. Dementia is a challenging condition, so we want to give local people all the support we can to deal with it. Our free café will make a big difference to people’s lives – offering them a place to find support, make friends and relax. We hope to welcome many more local people our future sessions.”

Rachel Yates, Dementia Development Coordinator at Making Space, says: “It’s been fantastic to work in partnership with Community Integrated Care to develop this dementia café. In times of austerity, this service shows what can be achieved when charities, members of the community and people who receive support come together. We’re very proud to have received such overwhelming feedback from guests at our first session today, and look forward to achieving even more together in the future.”