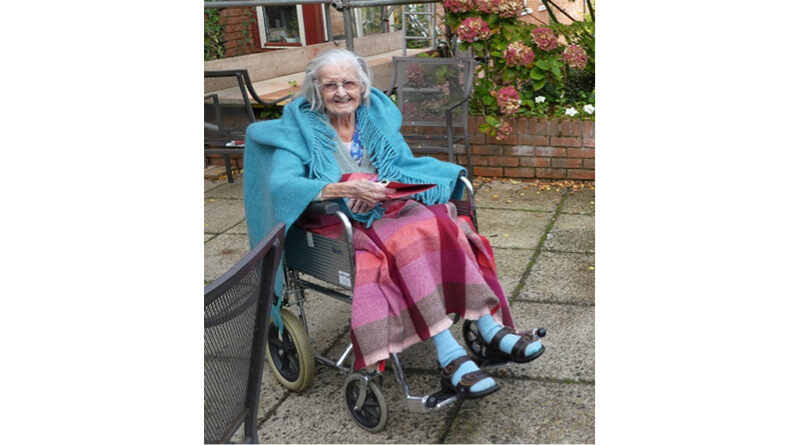 A former actress and ballet dancer from Ledbury has celebrated her 101st birthday at a local care home.

COVID-19 restrictions prevented a large family gathering for centenarian, Ruth Fincken. Despite this, staff members came together to give the 101-year-old flowers, cake and home-made cards. Relatives donned face masks and stood outside the home to sing happy birthday loudly so she could hear through the door.

Born in Stamford Hill, North London, Ruth joined ENSA (the Entertainments National Service Association) during World War Two, touring Army camps and hospitals raising moral as part of the war effort. She recalls then, when visiting munitions factories, her dancing troupe were unable do their normal tap routines for fear of causing an explosion.

As a lifelong tea-totaller, she once declined a drink from an American colonel – who then insisted that everyone present should have only soft drinks.

After the war, her theatrical career continued and she was one of the very first people to appear on television from Alexandra Palace, appearing in pantomimes. She also recalls her experience of riding on the back of Dick Emery’s Motorbike and going to a wedding with the Goons in her memoirs.

Ruth, also a keen cook, met her husband, Brian, at a Quaker meeting. They later had a son, Christopher, and she went onto become a grandmother and great grandmother.

Hayley Attwood, manager at the Shaw healthcare-operated home, said: “While the ongoing pandemic meant we were unable to put on the party we would have liked, we hope that Ruth enjoyed her celebrations.

“Having lived in Ledbury Nursing Home for several years, Ruth has become a close friend to many of our staff and residents and we were delighted to celebrate her 101st birthday with her.”