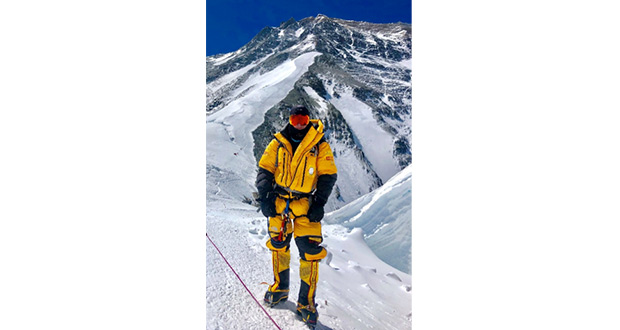 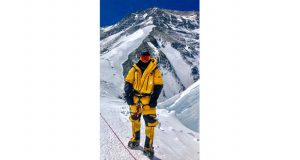 London, UK – Julian Evans, resident of Oakham, Leicestershire and Head of Healthcare at Knight Frank, has successfully completed the ultimate earth-bound challenge of scaling Mount Everest, raising over £300,000 for The Matt Hampson Foundation. This forms part of his quest to complete the True Adventurers Grand Slam and raise over £1 million for charity.

Following a 35 hour round trip from Advanced Base Camp, Evans successfully ascended to the summit of Mount Everest, the tallest mountain on Earth, standing at 8,848 metres (the equivalent of 30 Shards) on Thursday 23rd May at 12.35am. This was achieved despite the extremely tough weather conditions comprising minus 45-degree Celsius temperatures, storms and severe climber congestion resulting in a number of casualties.

Evans was guided by Sean James, and the expedition group’s lead Sherpa Lakpa, which ensured safe passage for the team in the face of extreme conditions and a tight summit window due to low air pressure resulting in congestion towards the summit of circa 120 climbers.

Julian Evans, Head of Healthcare at Knight Frank, said: “I am thrilled to complete such an epic expedition of Mount Everest following intense preparation and training, in addition to a torrid and difficult summit night where we experienced severe conditions and were pushed to our very limit.

“Throughout the expedition we were brilliantly guided by Sean James and Lakpa, and we are pleased to be back at Base Camp with our team, alive and well. However, the death zone was incredibly nerve-wracking and there were sadly fatal casualties, with our thoughts going to the families of those who lost their lives, including a lost kindred spirit from a close associate team.

“Despite the difficult conditions, it is incredibly satisfying and a great adventure to conquer some of the world’s greatest exploration challenges whilst raising money for worthy causes. I have a personal mission to complete the True Adventurers Grand Slam and am pleased to be one step closer to completing it having finished this epic challenge whilst raising money for The Matt Hampson Foundation, a wonderful charity that carries out fantastic work, and of which I am a long-term supporter.”

The True Adventurers Grand Slam is an adventurer’s challenge to reach the North and South pole and climb the Seven Summits (the highest peak on every continent), that has only been completed by 15 people in the world ever. Following Mount Everest, now only Aconcagua in Argentina and Carstensz Pyramid in Indonesia remain left for Evans to conquer.

The Matt Hampson Foundation, which was founded by former England rugby player Matt Hampson after he suffered a catastrophic spinal injury playing Rugby, provides advice, support, relief and/or treatment for anyone suffering serious injury or disability which has arisen from any cause, but in particular from participation in or training for any sport, sporting activity or other form of physical education or recreation.

In addition to his role at Knight Frank, Evans is a British Adventurer and dedicated Fundraiser, a Fellow of the Royal Institution of Chartered Surveyors, Fellow of The Royal Geographical Society, member of The Alpine Club and member of The Explorers Club.

The expedition to Mount Everest was in aid of raising funds and awareness for The Matt Hampson Foundation and was made possible via his generous sponsors, lead sponsor Caring Homes Group and Runwood Homes, Maria Mallaband, Porthaven, Hadrian Healthcare, Avery Healthcare, BondCare, Barchester Healthcare, Hallmark Healthcare, New Care and Advinia. Having already raised nearly £1 million for charity through his other expeditions, Evans has been privileged to participate in some extraordinary expeditions and continues to remain focused on his fundraising efforts. Lord Coe and Sir Ranulph Fiennes are supporters of his endeavours.