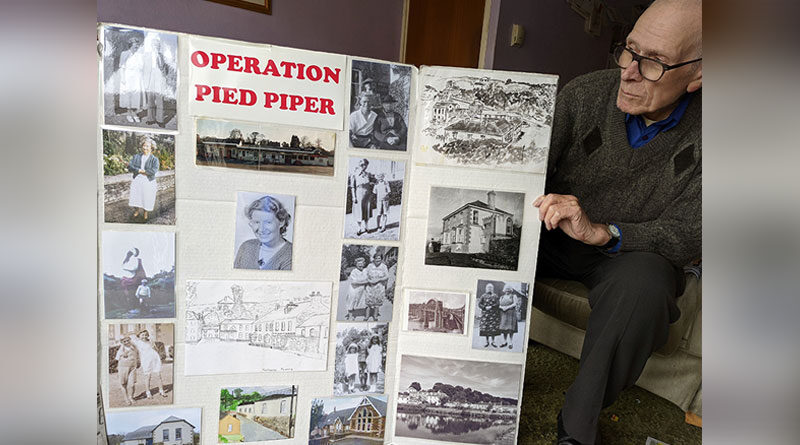 The “frightening childhood ordeal” of being a war evacuee during World War II has been captured in an artwork which is set to be showcased at a forthcoming exhibition in Essex.

Local artist Derek Finch is joining forces with patients and staff from the psychiatric hospital St Andrew’s Healthcare in Benfleet to showcase a collection of artworks as part of a new exhibition.

Traumatised by being forced to leave his family aged just 8 years old and live with strangers, Derek has sought solace from his artwork which has helped him come to terms with his childhood experience.

The exhibition, which will also showcase drawings, sculptures, poetry and music from St Andrew’s staff and patients, is being held to mark her Majesty the Queen’s Platinum Jubilee celebrations.

The event is being funded by the Arts Council which has provided the charity with a grant of just over £5,000 as part of the Let’s Create Jubilee Fund.

Members of the public are being invited to come along to view the artworks from Wednesday, May 30 until Thursday, June 2 between 12:00 and 15:00.

Annymn Adams, Lead Occupational Therapist at the hospital, said:
“Derek’s work gives us a glimpse into how he made sense of the frightening childhood ordeal of being a war evacuee.

“But central to all his work is a common theme, a message of hope and the beauty of the human spirit as it grows despite adversity. We’re thrilled that Derek agreed to take part in our very first art exhibition for members of the public.

“We wanted to do something special for our patients to mark the Jubilee, because unfortunately being a long-term patient at a hospital like St Andrew’s can mean many miss out on opportunities to make meaningful connections and be part of the national celebrations. But we hope to bring the celebration and the community to our site; that way removing the barrier of being hospitalised.

“We look after some of the most vulnerable people in our community, but that doesn’t mean that they have to miss out. We think this event will entice the community to come to us, and through the beautiful medium of art, it will give them the chance to find out a bit more about what we do.

There will also be interactive sessions held over the course of the three days, including a Rhythm to Recovery drum circle led by music therapist Chris Baron.

Darren Henley, the Chief Executive at Arts Council England, said:
“The Let’s Create Jubilee Fund is a wonderful example of our ambition to give everyone the opportunity to participate in and experience the arts, culture and creativity.”

Rosemary Macdonald, CEO, UK Community Foundations, said:
“For community foundations, people and places are the priority and the Queen’s Platinum Jubilee is a unique opportunity for people to get together and celebrate in their communities.”