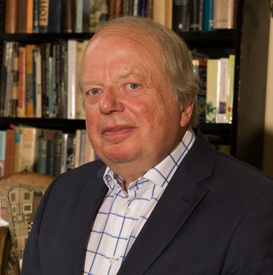 Independent Age and Barchester Healthcare are thrilled to announce that one of Britain’s most accomplished journalists, John Sergeant, is to host the Older People in the Media Awards ceremony this November.

As a regular contributor to the BBC’s One Show and following his much-loved appearance on Strictly Come Dancing, John shows that reaching 70 doesn’t have to get in the way of finding new work – or adding to his fan base.

The Older People in the Media Awards ceremony is an annual event, which aims to shine a light on the very best examples of coverage across all media, concerning older people’s issues, as well as celebrating some of the best examples of photojournalism and portrayals of older people in films or TV drama.

John Sergeant said about hosting the awards, “The media has a strong influence in shaping the views of society, so I am proud to play a part in recognising those who are working hard to highlight the issues older people face in a responsible and sensitive way. Their efforts will help to create a sea-change in the way older people are perceived, showing that no matter what their age, they still have an enormous amount to contribute.”

Previous winners of the Older People in the Media Awards have included Anne Reid for her role as Celia in Last Tango in Halifax, Dame Maggie Smith for her feisty, funny portrayal of the Dowager Lady Grantham in Downton Abbey, and Louis Theroux for his sensitive exploration of living with dementia in his documentary, Extreme Love. The awards have also recognised the excellence of lesser-known names such as dementia care worker and social media enthusiast, Darren Gormley, who last year saw off a host of media heavyweights be crowned the event’s champion of champions.

This year’s awards ceremony will be taking place in central London on the evening of 13 November and will be awarding the following categories:

· Best use of photography to illustrate older people’s issues

· Best older person’s character in a film, TV or radio drama (Gransnet special award, voted on by the readers of Gransnet)

· The ‘Thorn’ Award: worst example of stereotyping, factual error or misleading information in the coverage of older people’s issues.

Chief Executive of Independent Age, Janet Morrison, said: “We are delighted John Sergeant is joining us to host the Older People in the Media Awards this year. His extensive experience in broadcasting and journalism will bring great insight to the awards, their recognition of the talents of older role models and of those working hard to raise awareness of older people’s issues in the media today.”

Dr Pete Calveley, Chief Executive of Barchester Healthcare, added: “It’s an honour to be part of the Media Awards that reward the positive portrayal of older people in the media while offsetting the casual ageism that sometimes resurfaces, highlighted by the Thorn Award. Older people make up a huge part of the society we live in and their contributions and sheer amount of life experience should be valued and listened to. Individuality is something to be celebrated throughout life and we embrace it wholeheartedly at our care homes throughout the country.”

The full shortlist for the 2014 Older People in the Media Awards is available at www.independentage.org