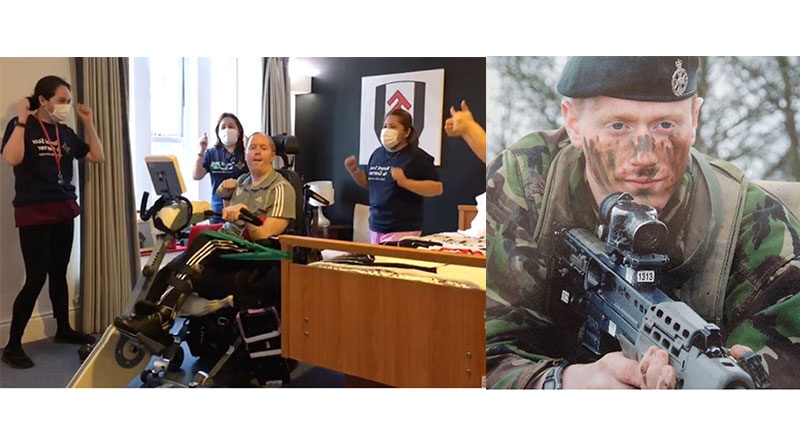 An ex-Rifleman left severely disabled by a bomb blast in Iraq has won a prestigious award in recognition of his charity fundraising.

Stephen Vause was named winner of the Soldiering On Awards’ Inspiration category following a public vote, on 28 October.

The 34-year-old lives at Royal Star & Garter in Surbiton, and was nominated by the charity, which provides loving, compassionate care to veterans and their partners living with disability or dementia.

Stephen undertook a gruelling 60-mile virtual London to Brighton cycle ride from his Royal Star & Garter room during the second lockdown, despite his injuries leaving him in a wheelchair and using a tablet to support communication.

With the help of staff at the Upper Brighton Road care home, he completed the challenge on his adapted static bike in six weeks, raising more than £5,000 for Help for Heroes.

The Soldiering On Awards recognise the outstanding achievements of those who have served their country, and the diverse people and groups who work together in support of the Armed Forces community.

His achievement was praised by the Prime Minister, Boris Johnson, who said: “Stephen has shown remarkable courage in dealing with his injuries and great fortitude in raising money for armed forces charities. I take my metaphorical hat off to him for his latest fund raising exploit. I am full of admiration for him.”

Stephen’s Help for Heroes fundraising efforts began on Christmas Eve 2020, and were backed by celebrities including Lord Sugar and Jeremy Vine. The final moments of his exploits on 1 February were captured on film by Royal Star & Garter staff and shared by Lorraine Kelly on her ITV breakfast show. Stephen also encouraged others to raise money with him using #do60withSteve.

His Help for Heroes fundraising is not the first time Stephen has demonstrated kindness and generosity. In 2018, when his sister raised money for Royal Star & Garter by participating in

Other finalists in the Inspiration category were Margo Hetherington MBE, Mark Ormrod MBE and Martin Hewitt. Stephen said: “I’m stunned. I want to thank everyone who voted for me, but I also want to share this award with the other finalists. They all deserved to win.”

Royal Star & Garter works closely with Help for Heroes, who also funded a bespoke wheelchair and specialist gym equipment to support Stephen’s care. Carol Betteridge OBE, Head of Clinical & Medical Services at Help for Heroes, said: “Huge congratulations to Steve for winning such a highly fought category where all the finalists are absolute inspirations. Steve fights every day to manage his physical injuries so his fundraising challenge for us was a major undertaking, and he did it with such determination and humour. He shows us all the great things you can achieve when you put your mind to it. He is an absolute hero.”

Stephen was just 19 and on his first tour of Iraq, serving with the 4th Battalion The Rifles, when a mortar explosion near Basra left him fighting for his life in 2007. Speaking after he finished his London to Brighton fundraiser, Stephen said: “Help for Heroes have helped me a great deal and I wanted to do something for them.”